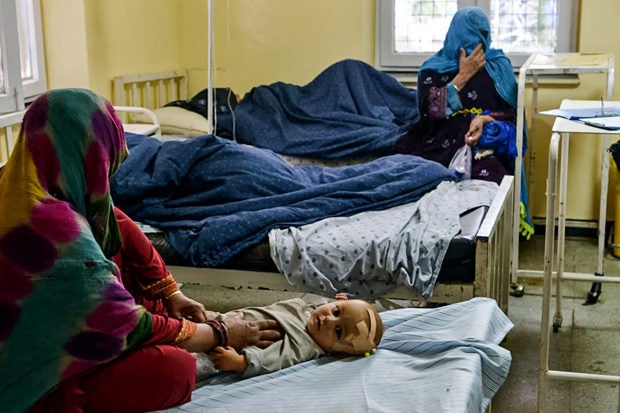 An Afghan child is treated inside a hospital in the city of Sharan after getting injured in an earthquake in Gayan district, Paktika province on June 22, 2022. AFP

SHARAN, Afghanistan—Bibi Hawa’s face is distorted by tears as she tries to grasp her predicament from a hospital bed in Sharan, capital of Afghanistan’s Paktika province.

At least a dozen members of her family were among over 1,000 people killed by a devastating earthquake that struck the region early Wednesday, and she fears she has been left all alone.

As a nurse tries to calm her down, talking to her gently and caressing her forehead, Bibi sighs: “My heart is weak.”

The 5.9-magnitude quake struck hardest in the rugged and impoverished east, where people already led hand-to-mouth lives made worse since the Taliban takeover in August.

The disaster poses a huge challenge for the hardline Islamists, who have largely isolated the country as a result of their hardline policies.

The United Nations in an initial estimate said over 2,000 homes were destroyed in the region, where the average family often has up to 20 members.

In the room where Bibi is being treated a dozen other women lie on beds — many asleep, some burrowed beneath blankets, others hooked up to vital fluids.

Shahmira is unhurt, but her one-year-old grandson lies in her lap, a large dressing covering his temple.

On the next bed her daughter-in-law is sleeping off her injuries, while a son is being treated in a different ward.

“We were sleeping when we heard a loud noise,” she tells AFP of the quake.

“I screamed… I thought my family was buried under the rubble and that I was the only one” still alive.

In an adjacent ward, a dozen men are also recovering on beds.

One father holds his son on his lap — the boy wearing mustard-coloured pants with little black hearts, one leg in a plaster cast.

Nearby another child lies under a blue blanket. His left arm is also in a cast, while on his forehead a white bandage bears the word “emergency” written in black marker.

“It was a horrible situation,” recalls Arup Khan, 22, talking of the moments after the quake.

“There were cries everywhere. The children and my family were under the mud.”

Mohammad Yahya Wiar, director of Sharan Hospital, says they have been doing their best to treat everyone.

When the injured arrived, they “were crying, and we were crying too”, he tells AFP.

“Our country is poor and lacks resources. This is a humanitarian crisis. It is like a tsunami.”

But locals are rallying to help. In front of the hospital, a hundred men are waiting patiently.

“They have come to give blood — about 300 have already given it since this morning,” explains a Taliban fighter.