Woman crosses Iloilo to Guimaras twice on paddle board 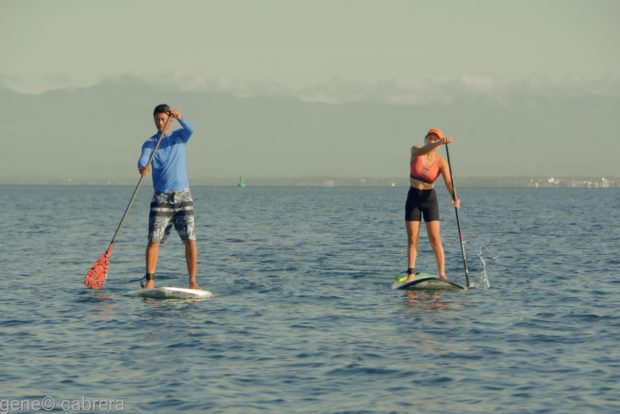 Lucy Lynette Ponce Uygongco, a 51-year-old businesswoman and native of Bacolod City, becomes the first woman to cross Iloilo to Guimaras via Stand Up Paddle (SUP) on May 26, 2022 and repeating the same feat on June 10. (Photo courtesy of Gene Cabrera)

ILOILO City—Early risers who either walk or jog at the Iloilo River Esplanade in the last six months are familiar with a woman standing daily on a standup paddle board, also known as SUP.

Lucy Lynette Ponce Uygongco, a 51-year-old businesswoman and native of Bacolod City in Negros Occcidental, had just learned SUP, which is similar to a surf board but uses a paddle to move through the water.

But six months after learning SUP, Uygongco became the first woman to cross Iloilo to Guimaras through SUP on May 26. She repeated the feat two weeks later, on June 10.

In her May attempt, she clocked one hour 31 minutes, and three seconds covering 7.38 km from Villa 8 Restaurant at Iloilo City’s Villa Beach and docking at Barangay Morubuan in Jordan town in Guimaras.

On the second attempt, she took the same route and clocked 2 hours and 2 seconds.

“We were going really slow because we were waiting for the banca,” said Uygongco of the second attempt, which, this time, went a bit further in Morubuan at 7.49 km.

A blogger about all things Iloilo going by the name LpuKids Ibike, Uygongco wrote in her blog on May 28: “So, after 6 months, I crossed this off my bucket list!”

Uygongco, wife of Ilonggo businessman Joebert Uygongco and mother of three, was encouraged by a fellow biker, William Rocia, to try SUP.

At first, she thought it was something impossible for her to do. Then she decided to give it a try.

As fate would have it, Uygongco saw Neil Benedicto on a paddle board on Nov. 12, 2021 while taking photos at the Iloilo River Esplanade for her blog.

Benedicto, 41, was the gold medalist in the 2019 Elite Raceboard Sprint 400 meters Philippine Deep Paddle Games on Siargao Island and was named Fastest Stand Up Paddleboarder of the year. Benedicto is also a longboarder, skimboarder, surfer, outrigger canoe paddler and Watersport Ambassador for Environmental Awareness.

Uygongco first asked permission to take his photos for her blog. Later, she asked if he could teach her how to paddle board.

The next day, the two met for their first lesson.

“At first, Lynette was shaking, and I had to coach her patiently until she gained confidence on the board, and from then on, she loved SUP and every day, she paddled at sunrise,” said Benedicto.

He had to teach Uygongco to concentrate first on balance and paddling strokes as well as reading the tide, current, and water texture.

This was followed by paddling against the wind and with the wind, wave-paddling strokes side by side with waves, and finally – long distance SUP facing different types of waves.

Uygongco would practice paddling using an SUP board with a length of 11 feet and 2 inches, width of 30 inches, and a thickness of 4.5 inches before sunrise from Monday to Saturday.

She would cover daily 10 km or about 2 hours and 18 minutes of SUPing from the bridge at the Ninoy Aquino Avenue (also called Iloilo City Diversion Road) all the way to Barangay Sooc in the city’s Villa Arevalo District. 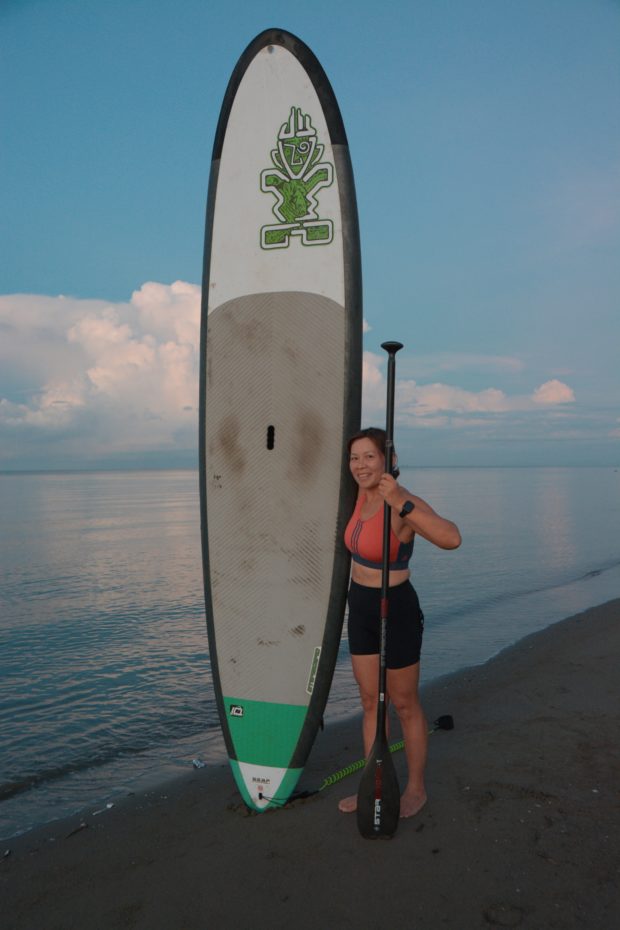 Lucy Lynette Ponce Uygongco, a 51-year-old businesswoman and native of Bacolod City, becomes the first woman to cross Iloilo to Guimaras via Stand Up Paddle (SUP) on May 26, 2022 and repeating the same feat on June 10. (Photo courtesy of Gene Cabrera)

Before crossing to Guimaras, Uygongco trained intensively for four days at Villa Beach in Iloilo City on May 20, 21, 24, and 25 to build her endurance.

Uygongco, who has developed “competition-worthy” abs, recalled that while she and Benedicto thought she was ready, two things came up to challenge her “coolness” and being a “control freak” right on the first attempt of crossing to Guimaras.

“From a distance, when we were in the middle of Iloilo Strait, I saw a ship of Montenegro Lines and thought it’s still far off, and the next thing I knew, it was near. Gary shouted that I should paddle faster to avoid the ripples of the ship’s waves or else I would fall off,” said Uygongco, a graduate of AB Interdisciplinary Studies from Ateneo de Manila.

Confident that Benedicto was paddling beside her and some 500 meters away was the banca she hired, Uygongco paddled furiously away from the Montenegro ship’s waves only to have Benedicto tell her that the ship may have intentionally come nearer so the captain could check her out on his binoculars, apparently disbelieving what he saw.

With that close call, a flustered Uygongco drank a gulp of an electrolyte drink and realized her knees were shaking even as she remained standing – something that has never happened during practice sessions.

“I can’t stop with Morubuan just 30 minutes away,” said Uygongco.

Upon reaching her destination, the feisty paddler finally shouted, “I did it! Yahoo!”

As a “gift” for her feat, Benedicto gave her a one-hour tour of the scenic Morubuan Mangroves River via SUP. Then they took the banca back to Villa 8 Restaurant, where Uygongco kept all her gear.

What came as a surprise was her June 10 attempt because it was all unintentional.

Uygongco wanted to reenact her first attempt because she did not have any decent photos that she could post in her blog, since her coach was also paddling beside her that time and her “guide boat” was 500 meters away.

Of the June 10 feat, Uygongco explains: “We (she and her coach) were waiting for the banca to accompany us in case anything happens at open sea and we decided to just paddle so the photographer could take photos and before we knew it, we were already about 20 minutes near Barangay Morubuan and that’s when the banca that we hired saw us,” said Uygongco.

She said the boatman was late since he had to deliver his fish catch.

Laughing at the ridiculousness of it all, Uygongco considered it a celebration of World Ocean Month that falls in June and June 8 being World Ocean Day as proclaimed by the United Nations Ocean Conference.