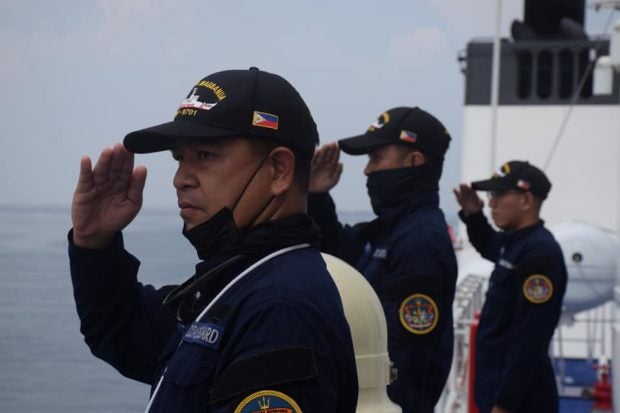 MANILA, Philippines — The Philippine Coast Guard will intensify its maritime patrol during the inauguration of President-elect Ferdinand “Bongbong” Marcos Jr., on June 30, with a plan to deploy three vessels and 10 floating assets in high-security areas.

PCG Commandant Admiral Artemio Abu said in a statement Thursday that the Coast Guard will deploy three multi-role response vessels (MRVVs) and 10 floating assets to conduct an “intensified” maritime patrol at the Manila Bay and parts of the Pasig River that are within the vicinity of Malacañang restricted area.

The MRRVs will be deployed in Manila Bay while small crafts will be used to patrol Pasig River, PCG spokesperson Commodore Armand Balilo told INQUIRER.net in a message.

Meanwhile, around 500 PCG personnel will be deployed on the day of the event, 300 of whom will be dispatched to support the Armed Forces of the Philippines and the Philippine National Police to ensure “maximum security,” Abu added.

The rest will be on standby for possible “force augmentation,” according to Abu.

“We are mustering our security personnel, the K-9 teams, and medical groups to make sure that we will be able to ensure peace and security during the inauguration of our president-elect [Marcos],” Abu said in a separate video statement posted on PCG’s Facebook page.

Land mobility vehicles will also be positioned on the day of the inauguration to maintain the order and flow of traffic, he added.

The PCG official, meanwhile, called on the public to comply with the safety guidelines to be imposed during Marcos’ inauguration.

(Our call to the public, especially to those who want to witness the inauguration of President-elect Marcos here in Manila, is for them to follow safety guidelines. Let us avoid carrying prohibited items and keep on wearing face masks since we are still in the midst of the pandemic.) —Iliana Padigos, INQUIRER.net intern