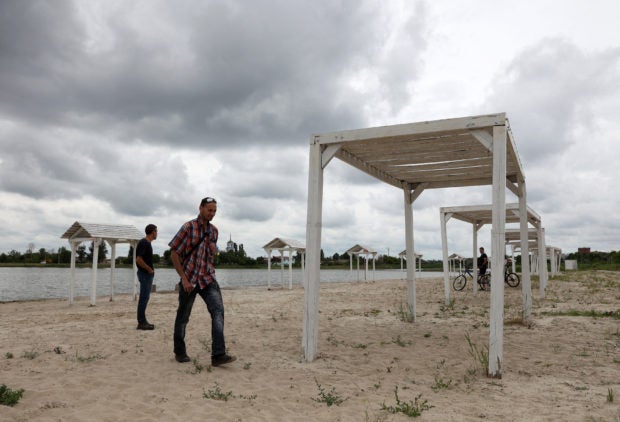 Local residents walk on the deserted beach of Sloviansk on June 22, 2022 as Russian frontline is only about 10 kilometers away and the Ukrainian armed forces said that Moscow’s troops are carrying out systematic firing in order to resume an offensive on Sloviansk. AFP

SLOVIANSK, Ukraine—With its white sand, changing cubicles and clear water, the beach at Sloviansk in eastern Ukraine looks tempting. There’s just one problem: the nearby bangs of rockets and missiles.

The lakeside resort is close to one of the most active fronts in the war with Russia, to the north of Sloviansk, where Ukrainian troops firing from woods and villages are seeking to halt Moscow’s advance.

But that doesn’t dissuade some beachgoers.

“We just came here to walk around and take some snaps,” says Kostyantyn, 40, strolling around wearing wraparound sunglasses and shorts.

“We wanted (to swim) but it’s too cold,” he adds as the sunbaked region has a rare cloudy day.

“A beach is a beach,” he says, taking pictures of his friend Denys at an outdoor gym.

The nearby arms fire sounds like American howitzers, supplied to Ukrainian troops.

The Russian frontline is only about 10 kilometers (six miles) away and the Ukrainian armed forces said Wednesday that Moscow’s troops were carrying out systematic firing in order to resume an offensive on Sloviansk.

The Sloviansk lake resort was once famous for its salty waters, believed to help relieve joint problems.

A sanatorium built on the spot is no longer open, however.

“It’s pretty, people come to swim. We also come to see the swans,” says Daniil, 39, who cycled along the beach with a group of friends on the way to buy food in Sloviansk. 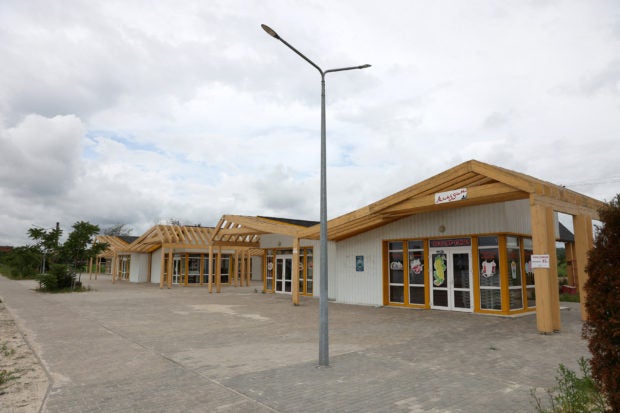 A picture shows the deserted beach of Sloviansk on June 22, 2022 as Russian frontline is only about 10 kilometers away and the Ukrainian armed forces said that Moscow’s troops are carrying out systematic firing in order to resume an offensive on Sloviansk. AFP

Daniil says he is a metal worker at the Sloviansk power station in the nearby town of Mykolaivka, which has halted work due to the war.

Orange plastic letters on a beach hut read: “Be happy this summer”, but the beach loungers have been locked inside. Ice cream stalls and a massage cabin are also closed.

“We used to come a lot before the war”, Kostyantyn explained. “This is just the second time this year.”

He says he has been helping out locally: feeding dogs abandoned by their owners, who have left for safer western Ukraine.

“I’m not scared because I’m a volunteer and have been under shelling,” he says, as loud booms can be heard in the background.

Kostyantyn recalls how he was caught up in a Russian shelling attack on an evacuation bus in Kharkiv region in February.

“With what’s happening now, you realise that life is not so threatening. People’s fear is more of a threat, since what they fear comes true.”

As the war draws on, those who opted not to evacuate from the area have become “very pushy and hardened,” he says.

“I think it’s more like a form of nerve stress.”

“There are those who are waiting for Russians to come,” interjects his friend Denys.

“People think it will be better, that they’ll get a Russian pension.”

There are also some who already receive benefits from the Moscow-backed separatist regions, adds Kostyantyn.

In 2014, Sloviansk was taken over by Russia-backed separatists and Ukraine only won it back after a lengthy siege.

Now the sleepy green town has no water or gas and an unstable electricity supply due to war damage and difficulties of repairs, its mayor told AFP this week.

Stacks of concrete beams on the road from the beach resort into the city creates a lengthy obstacle course for vehicles and trenches have been built along it.