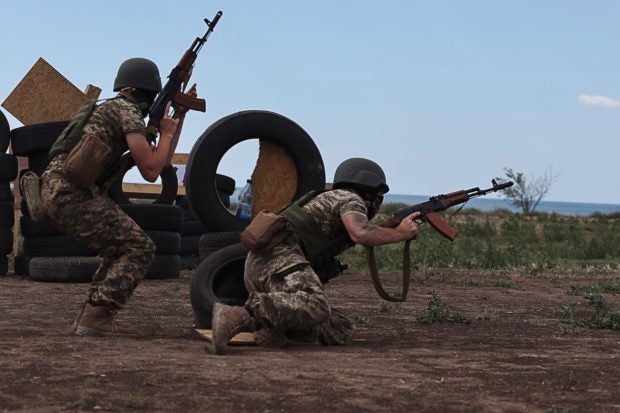 Servicemen of the 126th Separate Territorial Brigade of the Armed Forces of Ukraine take part in military exercises in Odessa region on June 22, 2022, amid Russia’s military invasion launched on Ukraine. AFP

Kyiv, Ukraine—Here are the latest developments in the war in Ukraine:

Grain on the move

Ankara says the Azov Concord is the first foreign ship to leave the port in Mariupol — a city devastated by a weeks-long Russian siege — since Russia invaded Ukraine in February.

The statement did not say what the ship’s cargo was.

Turkey has been spearheading efforts to resume exports of grain stalled by a Russian military blockade of Ukrainian ports that has been blamed for worsening global food shortages.

“The meeting (between Turkish and Russian generals) in Moscow gave its first concrete result,” the Turkish defence ministry says.

A Ukrainian official says Russian forces are “massively” shelling the eastern city of Lysychansk, one of two sister cities in the Lugansk region pivotal in the battle for Ukraine’s industrial heartland of Donbas.

“They are just destroying everything there,” Lugansk governor Sergiy Gaiday says. He adds residents are being evacuated.

Lysychansk lies just across the Donets river from the ruined city of Severodonetsk, where the last remaining Ukrainian troops are holding out at a chemical plant while waiting for more heavy weapons to try to stall the Russians’ advance.

Ukraine and Russia are far from ending the war through negotiations, German Chancellor Olaf Scholz warns.

“The truth is, we are far from negotiations between Ukraine and Russia. Because Putin still believes in the possibility of a dictated peace,” Scholz tells German lawmakers.

Scholz urges Western allies to keep up their support for Ukraine, in the form of sanctions, arms and financial support “until Putin finally recognises his colossal misjudgement”.

He adds that Ukraine will ultimately need a “Marshall Plan” assistance programme to rebuild. 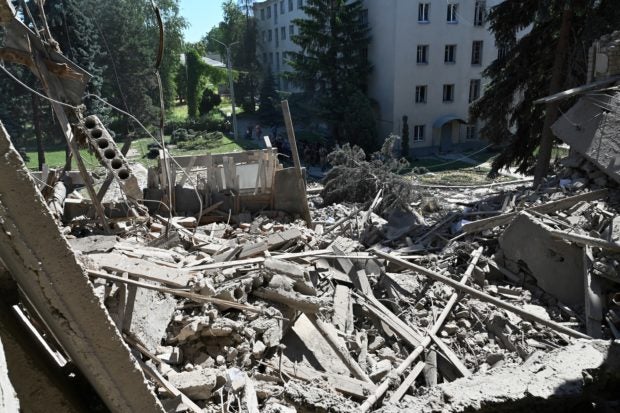 This picture shows a partially destroyed educational and laboratory building of a college hit the day before by a rocket in Kharkiv on June 21, 2022. AFP

Russia accuses Germany of anti-Russian sentiment as it marks the anniversary of the invasion of the Soviet Union by Nazi troops in 1941.

“Russophobic hysteria is systematically fuelled by almost daily public attacks against our country by members of the German government,” Russia’s foreign ministry says, accusing Berlin of “undermining the process of historical reconciliation between Russians and Germans.”

Lithuania has ‘ironclad’ support: US

The United States says its commitment to defend Russia neighbor and fellow Nato member Lithuania in the event of attack is “ironclad.”

“We stand by our Nato allies and we stand by Lithuania,” State Department spokesman Ned Price says, saying an attack on the country would, under Nato rules, be considered “an attack on all” alliance members.

EU member Lithuania, a conduit for goods travelling between the Russian mainland to its east and Russia’s Baltic Sea outpost of Kaliningrad to its west, has drawn Moscow’s ire by banning rail convoys of goods targeted by EU sanctions.

The US expresses outrage after President Vladimir Putin’s spokesman suggests that two Americans captured while fighting for Ukraine could face execution.

“It’s appalling that a public official in Russia would even suggest the death penalty for two American citizens that were in Ukraine,” John Kirby, a White House spokesman, says.

He was reacting to an NBC News interview with Dmitry Peskov, in which he accused Alexander Drueke and Andy Huynh of being mercenaries.