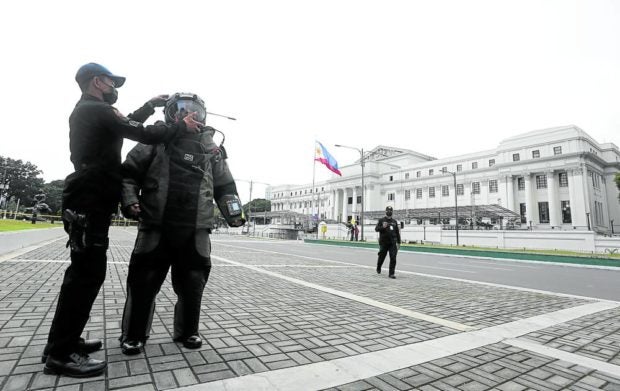 Members of the Explosive Ordnance Division of the Manila Police District hold a drill responding to a bomb threat in the vicinity of the National Museum in Manila on Monday, June 20, 2022, days before the inauguration of President-elect Ferdinand Marcos Jr. at the historic building. (File photo by NIÑO JESUS ORBETA / Philippine Daily Inquirer)

MANILA, Philippines —  The Communist Party of the Philippines (CPP) accused the Department of the Interior and Local Government (DILG) of spreading word about an alleged plan of the party to disrupt the oath-taking of President-elect Ferdinand “Bongbong” Marcos Jr. on June 30 to preempt protests.

“The DILG must be condemned for engaging in brazen red-baiting to justify their plan to use the police to suppress by force the planned mass actions by broad democratic sectors,” Marcos Valbuena, CPP spokesperson, said in a statement sent to INQUIRER.net.

“This clearly aims to intimidate and bully the people from joining the planned mass demonstrations,” he added.

In its statement released on Tuesday, the DILG said that CPP and its alleged front organizations were “planning to muddle or disrupt” the Marcos inauguratoin at the National Museum in Manila on June 30.

The DILG said it got the information from alleged former cadres of the CPP and its armed wing, the New People’s Army,

It was Interior Secretary Eduardo Año who first spoke of the alleged CPP plot.

Interior spokesperson Undersecretary Jonathan Malaya said the DILG was taking intelligence reports seriously. So security measures had been stepped up in the area.

For his part, Valbuena encouraged the people to protest at the inauguration.

“It is well within the people’s rights,” he said. “We urge the broad democratic sectors of the Filipino people to continue with their planned mass actions and assert their rights to peaceably assemble and voice out their protest.”

“They must not allow themselves to be cowed from raising their voices and carrying forward the national and democratic interests of the Filipino people,” he added.