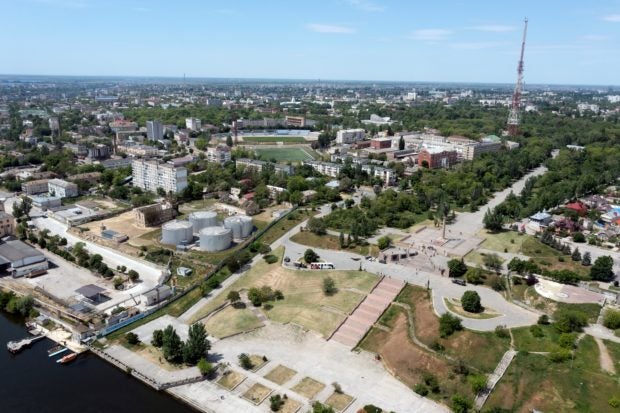 An aerial view shows the city of Kherson on May 20, 2022, amid the ongoing Russian military action in Ukraine. AFP

BRUSSELS — Alyona Lapchuk spent weeks looking for her husband before she found out he was dead when his body turned up in a river in the Russian-occupied city of Kherson.

Speaking by phone to an AFP journalist in Europe, Lapchuk said her husband Vitaliy had gone missing after he was interrogated by Russian troops in Kherson, their hometown near Moscow-annexed Crimea.

The city in southern Ukraine, which had 300,000 inhabitants before the war, fell into Russian hands barely a week into the invasion and has since been virtually cut off from the outside world.

When the fighting began, Vitaliy Lapchuk, 48, was working in Kyiv and he rushed back home to join the city’s territorial defense.

And on March 27, some three weeks after it fell, he simply disappeared.

Lapchuk, 54, said she repeatedly tried to call him but he never answered.

“I called again and again. Suddenly, the calls started being rejected, and I realized we had a problem,” she told AFP from the safety of a new location inside Ukraine-held territory, without saying where.

Hours later, three cars marked with the letter Z — the symbol used by Russian troops in Ukraine — stopped outside her home and she went out to the gate.

The soldiers pulled her husband out of one of the cars, but she almost didn’t recognize him because his face was drenched in blood.

Entering the house at gunpoint, they removed phones and laptops. All her husband was able to say to her was that they had promised him they “wouldn’t lay a hand on the family”.

Then they put a bag over the head of their eldest son, who is 34, and did the same to her and her husband.

“I will never forget the look on Vitaliy’s face when those bags were put over our heads,” she said.

After being questioned, she says they were dumped under a bridge and when they took off the bags, she and her son were alone.

For more than two months, they heard nothing.

Then on June 9, she was told some fishermen had found his body at the bottom of a river, his feet weighed down with a rock.

Her story offers a chilling insight into the life under Russian occupation in Kherson, where others also spoke of interrogations and kidnappings.

Tetyana, another local who did not give her surname, told AFP Russia’s FSB security services and SOBR National Guard were operating in Kherson.

“They can come and take someone, they can just take someone off the bus without explanation,” she said.

“Some people come back, others don’t.”

Residents are subjected to “constant checks at numerous checkpoints” with Russians checking “documents, phones and bags”.

On a Moscow-organized visit to Kherson earlier this month, an AFP reporter said there were only a few soldiers in the center, but many checkpoints on the outskirts.

But unlike in other occupied towns and cities in the south such as the port of Berdyansk, there were few Russian flags flying, he said.

Tetyana said some residents had painted Ukrainian flags in the streets or hung blue and yellow ribbons on tree branches in protest.

“It is very difficult for the Russians to stop this because (when they take them down) they keep reappearing,” she said.

Russian forces were also struggling to enforce the use of the Russian ruble in Kherson, with people insisting on “paying in (Ukrainian) hryvnia”.

And since the takeover, residents of Kherson and other occupied areas say food prices have skyrocketed.

In Skadovsk, a nearby town on the Black Sea, one woman said prices had risen “at least threefold”.

“Everything is expensive, apart from bread and some vegetables. It’s hard to get dairy products,” she said without giving her name.

After severe shortages of medicine in the region, some critical drugs were once again available but hard to get hold of, she said.

Not everyone in Kherson has given up hope that the town will eventually be liberated by the Ukrainian army.

“When Kherson is liberated, I will be able to go back and set up a bench” in my husband’s memory, said Lapchuk.

“I will be able to talk to him again.”