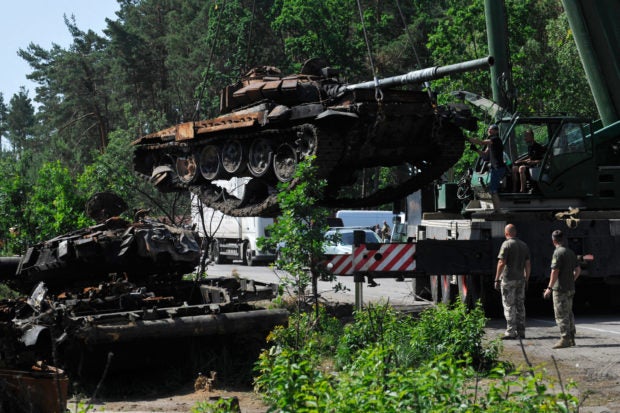 Ukrainian servicemen collect destroyed Russian tanks outside the village of Dmytrivka, in Kyiv region, on June 20, 2022 amid the Russian invasion of Ukraine. AFP

Russia steps up its shelling in Ukraine’s Kharkiv and Donetsk regions, after Ukrainian President Volodymyr Zelensky warns to expect intensified hostilities ahead of an expected European Union decision on Kyiv’s bid for candidate status.

Fighting also continues in the key eastern industrial city of Severodonetsk, with Ukraine saying it has lost control of the adjacent village of Metyolkine.

Moscow’s forces have been pounding eastern Ukraine for weeks as they try to seize the key industrial Donbas region, after being repelled from other parts of the country following their February invasion.

Regional governor Sergiy Gaiday also says on social media that the Azot chemical plant in Severodonetsk, where hundreds of civilians are said to be sheltering, is being shelled by Russian forces “constantly”.

China’s imports of oil from Russia rose 55 percent in May, according to new customs data, helping to offset losses from Western sanctions over the invasion of Ukraine.

The world’s second-biggest economy imported around 8.42 million tons of oil from Russia last month, surpassing its shipments from Saudi Arabia.

Russia threatens to retaliate against Lithuania’s “openly hostile” restrictions on the rail transit of EU-sanctioned goods to Moscow’s exclave of Kaliningrad, wedged between Lithuania and Poland.

“Russia reserves the right to take actions to protect its national interests” if cargo transit from Kaliningrad to the rest of the country via Lithuania is not restored in full soon, the foreign ministry says in a statement.

The Baltic nation of Lithuania announced last week that it was banning the rail transit of goods that are subject to EU sanctions from mainland Russia to Kaliningrad.

Ukraine is engaged in “complex negotiations” to release its ports from Russia’s blockade, Zelensky says.

“There is no progress yet… That is why the global food crisis will continue as long as this colonial war continues,” he says in a video address to the African Union.

He was speaking after EU foreign policy chief Josep Borrell said that Russia should be held “accountable” if it continues blocking the export of grain from Ukraine.

“One cannot imagine that millions of tonnes of wheat remain blocked in Ukraine while in the rest of the world people are suffering hunger. This is a real war crime,” Borrell said at a meeting of EU foreign ministers.

Nato Secretary General Jens Stoltenberg meets with representatives from Finland, Sweden and Turkey to try to make progress on the Nordic nations’ membership applications, which have been blocked by Ankara, ahead of a summit next week.

Germany on Monday dampened hopes of a deal being reached quickly.

Ankara has accused Finland and Sweden of providing a safe haven for the Kurdistan Workers’ Party (PKK), listed as a “terrorist” group by Turkey and its Western allies.