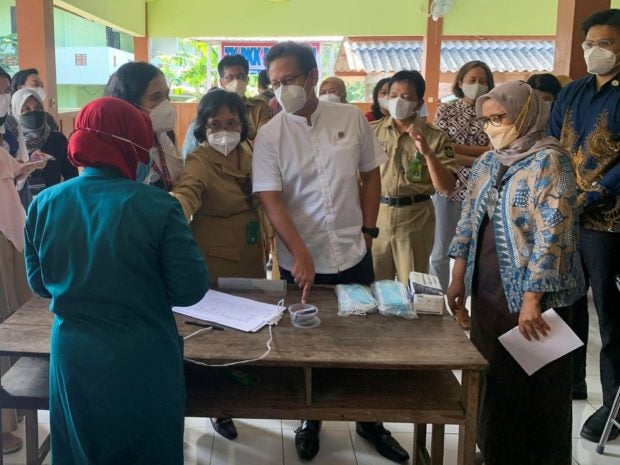 Indonesia’s Health Minister Budi Gunadi Sadikin talks to a health official during a tuberculosis screening on the sidelines of the G20 “Health Working Group” event in Yogyakarta, Indonesia, March 29, 2022. REUTERS

JAKARTA — The Group of 20 (G20) major economies aims to raise $1.5 billion this year for a fund set up to better prepare for future pandemics, the health minister of current G20 president Indonesia said on Friday.

G20 countries have provisionally agreed to set up a multi-billion dollar fund that health officials have said will finance efforts like surveillance, research, and better access to vaccination for lower-to-middle income countries, among others.

Indonesian Health Minister Budi Gunadi Sadikin said in an interview the United States, European Union, Indonesia, Singapore and Germany have pledged about $1.1 billion to the fund so far.

“If we can get by the end of this year $1.5 billion of fresh funding, we will be very, very happy,” he told Reuters, adding he hopes the group can raise another $1.5 billion next year.

Indonesia will host the G20 leaders summit in Bali in November.

The World Bank, which will house the fund, and the World Health Organization (WHO), which is advising on the facility, estimated in a report that the annual funding gap for pandemic preparedness is $10.5 billion.

Budi said he will start discussing contributions to the fund with countries like Japan and Britain at a G20 health ministers meeting in Indonesia next week.

“Pandemic is a war, and we have to be ready with enough money when war happens,” he said.

The United States and Indonesia have been pushing for the establishment of the fund to help the world be better prepared to tackle future pandemics, but the WHO has been concerned the fund could undermine its own efforts and those of other global health mechanisms.

But Budi said the WHO will play “a leadership role” in identifying which countries would need the fund or provide other countermeasures.

The World Bank has said the fund is expected to be operational this year, and Budi said the structure for the fund could be established in a few months’ time.

G20 must recommit to COVAX