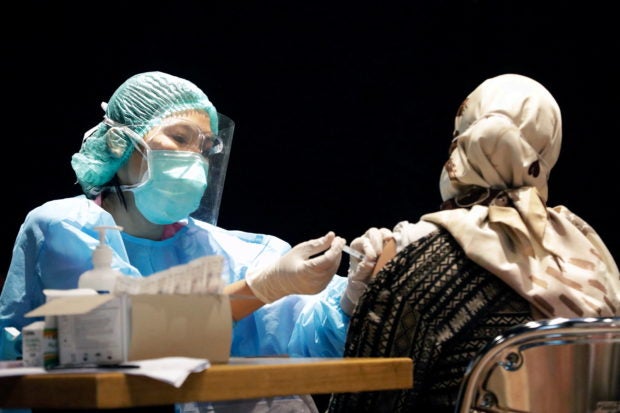 A healthcare worker inoculates a woman with a dose of the Pfizer vaccine against the coronavirus disease (COVID-19) during a mass vaccination program at a shopping mall in Jakarta, Indonesia, August 31, 2021. (REUTERS/File Photo)

JAKARTA  – Indonesia will urge the Group of 20 leading economies to establish a global body that can dispense emergency funds during a health crisis, functioning in a similar way to international financial institutions, its health minister said on Friday.

Under the current system, countries are “basically on their own” if they need emergency funds, vaccines, therapeutics or diagnostics, and as G20 president this year, Indonesia will seek to change that, Health Minister Budi Gunadi Sadikin told a news conference.

“There is no global health institution that has enough power or money to jump in and help, you are basically on your own,” he said.

The idea adds to a proposal by Indonesia and the United States last year to create an international pandemic response system.

Budi likened the health fund proposal to the creation of the World Bank and International Monetary Fund (IMF) following the Bretton Woods conference of 1944.

His remarks come a day after the World Health Organization (WHO) and other aid groups said a global health initiative to make COVID-19 vaccines and testing available to poorer countries had received just 5% of targeted donations for this year’s aims.

Indonesia President Joko Widodo on Thursday urged support for that initiative from developed countries, saying all nations needed equal chance to prepare themselves for future pandemics.

Budi, a former banker, said he doubted the WHO would be up to the task of managing a global health fund of the scale Indonesia was proposing.

“Whether the WHO is equipped to raise a trillion USD like the IMF, to be honest, (after) 30 years in finance, I don’t think so,” he said. “The WHO is not built to do this job.”

Indonesia’s WHO chapter did not immediately respond to a request for comment.

Budi said organisations like the Global Fund, an international financing organisation, or GAVI, the global Vaccine Alliance, might be better suited.