Meth worth P1 million seized from suspect in General Santos 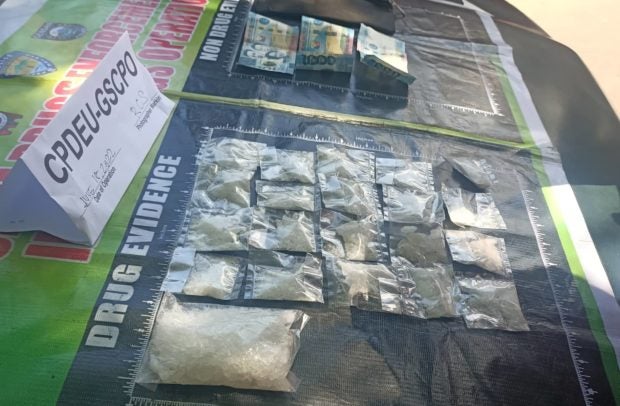 These items were seized from suspect Jason Tiu Lacsamana, who was arrested in a buy-bust operation on Saturday, June 18, 2022. (Photo courtesy of the General Santos City Police Office)

Col. Paul Bometivo, acting director of the General Santos City Police Office, said in a report that the seized illegal drugs, the biggest recovery so far in a single operation here, were found in the possession of suspect Jason Tiu Lacsamana, 47, a resident of Toril, Davao City.

He said Lacsamana was cornered by a team composed of members of the city police Drug Enforcement Unit and the Philippine Drug Enforcement Agency (PDEA) in Soccsksargen (Region 12) in an entrapment at around 11:39 a.m. Saturday on Bula-Lagao Road in Barangay Bula here.

Bometivo said the suspect sold a sachet of suspected shabu worth P1,000 to a police officer who posed as a buyer. In a subsequent search, Lacsamana yielded a “jumbo” and 20 “large” rectangular plastic sachets, containing a combined volume of 150.5 grams of suspected shabu valued at P1.02 million based on the national standard drug price.

The seized illegal drugs were submitted to the Police Regional Office 12 crime laboratory for examination, he said.

Lt. Col. Aldrin Gonzales, the spokesperson of the city police office, told the Inquirer the suspect’s presence in the city was monitored by intelligence operatives two weeks ago.

He said Lacsamana was a transient with no permanent address in the city. He reportedly traveled from Toril, Davao City using a public utility vehicle.

“He was under surveillance for two weeks. Our operatives were able to finalize the transaction with him yesterday [Saturday] so he surfaced and was eventually entrapped,” he said.

Gonzales said Lacsamana had been considered a high-value drug personality and had “no other work aside from peddling shabu.”

Bometivo has ordered a deeper investigation and follow-up operations to identify the supplier of the confiscated illegal drugs.

“I urge the public not to hesitate to come forward and report to us any relevant information regarding illegal drug activities in their areas,” he said.

Charges for the selling and possession of dangerous drugs, a violation of Sections 5 and 11 of the Comprehensive Dangerous Drugs Act, are being prepared against the suspect.