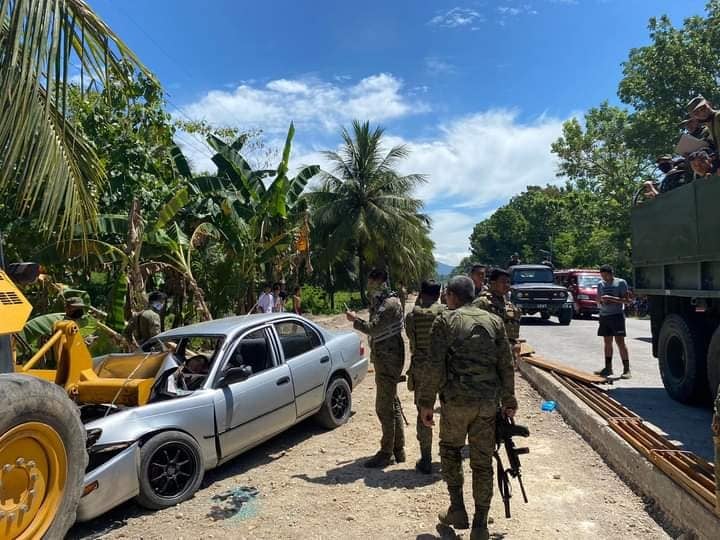 AMBUSHED. Responding soldiers and police view the ill-fated car that hit a parked payloader after it was ambushed along the national highway in Datu Odin Sinsuat, Maguindanao. (Photo from Datu Odin Sinsuat MDRRMO)

DATU ODIN SINSUAT, Maguindanao—A militiaman was killed while three of his companions were hurt in an ambush here at around noon on Friday

Lt. Colonel Assir Balindong, the town’s police chief, said Thong Kaul, 40, a member of the Citizens Armed Forces Geographical Unit (CAFGU) from Barangay Bagan, Guindulungan, Maguindanao was killed when two gunmen waylaid him and his companions along the national highway in Barangay Makir.

Injured were Datu Ali Arsad, 29, Mohammad Talipasan Mama, 27, both of Talayan town and Salindatu Mangulamas, 33, of Barangay Makir. They sustained multiple gunshot wounds in various parts of their body.

Investigation showed that the victims were on board a Silver Toyota Corolla sedan driven by Kaul when the motorcycle-riding gunmen fired at them.

After the ambush, the driver lost control of the steering wheel and hit the steel bucket of a parked payloader.