Danao, family of hit-and-run suspect unknown to each other, says PNP spox 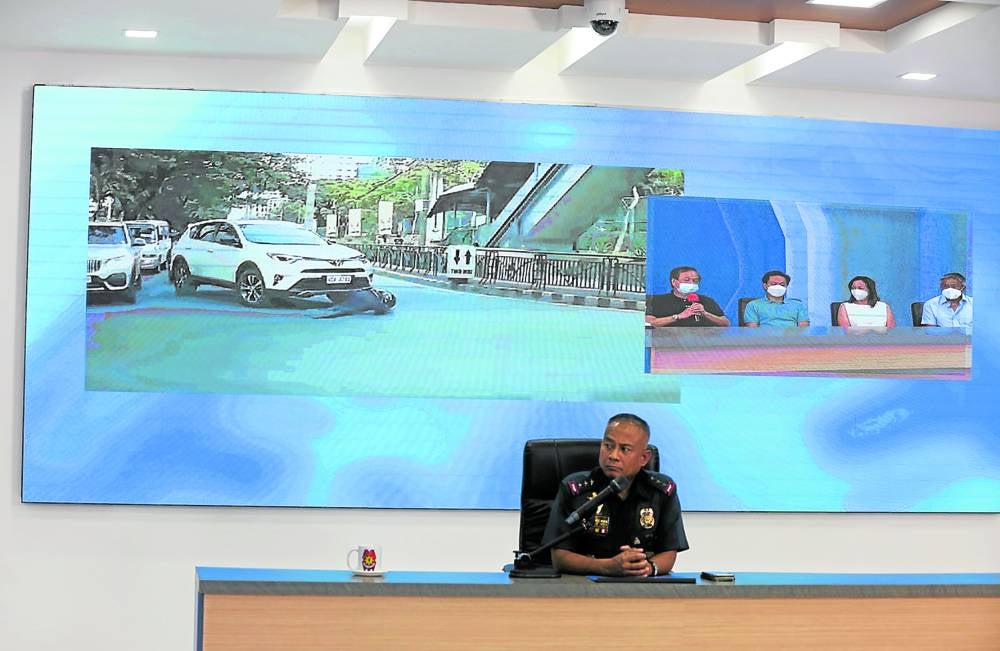 (FILE) Jose Antonio Sanvicente, the driver (in blue shirt) wanted by the police for escaping after running over a security guard finally shows up on Wednesday at Camp Crame with his parents and apologized to his victim 10 days after the incident. Philippine National Police officer in charge Lt. Gen. Vicente Danao Jr. , who angrily demanded his surrender, watches calmly a press conference where Sanvicente’s lawyer, Danilo Macalino (in black shirt), did most of the talking. (Photo by NIÑO JESUS ORBETA / Philippine Daily Inquirer)

MANILA, Philippines — The Philippine National Police (PNP) on Friday said PNP officer-in-charge Police Lieutenant General Vicente Danao Jr. and the family of the suspect in the Mandaluyong City hit-and-run incident are unknown to each other.

PNP spokesperson Police Colonel Jean Fajardo told INQUIRER.net on Friday that Danao and the family of  suspect Jose Antonio Sanvicente, only met the first time when the latter surrendered at Camp Crame in Quezon City on Wednesday.

“That is not true,” Fajardo said in a text message when asked if Danao and the Sanvicente family know each other.

Fajardo also explained that the PNP is following due process amid criticisms that the suspect is getting special treatment.

“We respect their reactions and opinions,” Fajardo said.

“On the part of the PNP, there is already a case filed at the Mandaluyong Prosecutor’s Office and we are bound to follow and respect the legal process,” she added.

Sanvicente is the driver of the Toyota RAV4 which figured in the hit-and-run incident in Mandaluyong.

The suspect’s vehicle was caught on video as it hit and then ran over security guard Christian Floralde, who was directing traffic at an intersection along Doña Julia Vargas Avenue, in Mandaluyong City on June 5.

A video of the incident had since gone viral but Sanvicente only surfaced after 10 days. His license to drive was revoked by the Land Transportation Office and formal charges were filed against him before the prosecutor’s office of Mandaluyong.