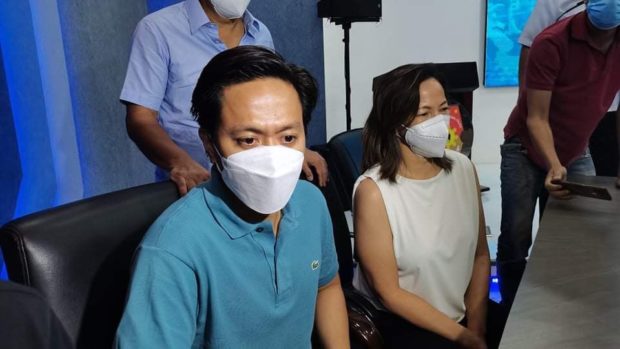 FILE PHOTO: Jose Antonio Sanvicente with his mother during a press conference at the PNP headquarters in Camp Crame. CONTRIBUTED PHOTO

MANILA, Philippines — A Philippine National Police official on Thursday admitted that it may have inadvertently given more media mileage to the driver of a sports utility vehicle involved in a hit-and-run incident in Mandaluyong after being allowed to hold a press conference at the PNP headquarters in Camp Crame.

The PNP was accused of giving more media mileage to suspect Jose Antonio Sanvicente who had tried to elude arrest after ramming his SUV against security guard Christian Joseph Floralde while he was manning the traffic along Doña Julia Vargas in Mandaluyong last June 5, and even ran over him while slumped on the ground.

A video of the incident had since gone viral but Sanvicente only surfaced after 10 days. His license to drive was revoked by the Land Transportation Office and formal charges were filed against him before the prosecutor’s office of Mandaluyong.

On Wednesday, Sanvicente – accompanied by his parents and a lawyer – finally surrendered to the PNP, which had then subsequently conducted a media briefing via its social media platform, the “Pulis @ Ur Serbis” program, which aired over UNTV and picked up by government station, PTV.

“I am with you on that,” Police Director for Operations Maj. Gen. Valeriano De Leon said in an interview on Teleradyo when asked about the observation of social media users that the PNP’s press conference appeared to have favored the suspect more than the victim.

De Leon claimed that was not the intention of the press conference, as the PNP merely wanted to present the suspect to the media.

He said he would raise the public’s observation to the PNP’s Public Information Office so they could “improve some standard procedures.”

During the PNP briefing, Sanvicente was given the opportunity to apologize to Floralde, who had since been discharged from the hospital.

De Leon said the PNP may also extend the same courtesy of a press conference to Floralde if he wants to air his side.

“Pwede naman (He can) … [if] he will so desire to come in the open to also say his piece,” the police official said.