Parts of storm-wrecked Yellowstone to remain shut all year 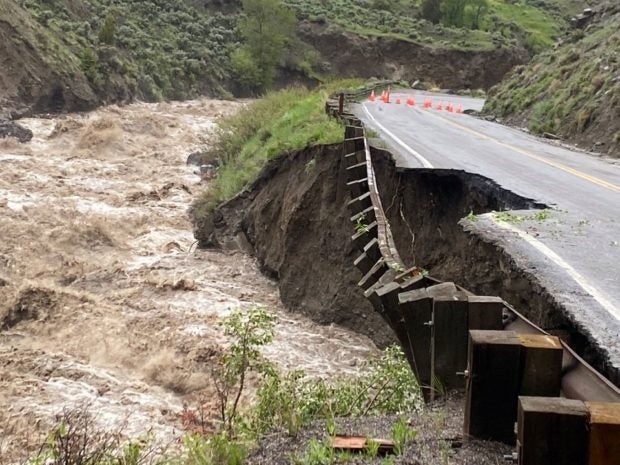 LOS ANGELES — Parts of Yellowstone will remain closed for the rest of the year because of extensive flood damage, managers say, with the oldest national park in the United States completely shuttered Wednesday.

Roads have been washed out in the northern portion of the 9,000 square kilometer (3,400 square mile) park after torrential rainfall and snowmelt sent months’ worth of run-off into rivers in just a couple of days.

All the entrances to the park, which sits chiefly in Wyoming and is home to the Old Faithful geyser, remained closed Wednesday for a third consecutive day.

Images released by the National Park Service showed large sections of paved road had been swept away by raging rivers.

Aerial reconnaissance revealed “major damage to multiple sections of road” in the northern part of the park, the agency said in its latests assessment.

“Many sections of road in these areas are completely gone and will require substantial time and effort to reconstruct.

“The National Park Service will make every effort to repair these roads as soon as possible; however, it is probable that road sections in northern Yellowstone will not reopen this season.”

Several communities on the north side of the park in Montana also experienced significant flooding, with bridges and roads washed out in Park County.

Montana Governor Greg Gianforte declared a statewide disaster on Tuesday “to help impacted communities get back on their feet as soon as possible,” he said on Twitter.

A huge dome of high pressure is sitting over the United States, sending temperatures soaring for 120 million people.

Meteorologists say the edge of that dome, where colder air meets warm air, is experiencing wild weather, including heavy rainfall.

Higher-than-usual temperatures have also caused snowpack on the high mountains to melt, adding to the influx of water into rivers.

Forecasters at CNN calculated that several months’ of run-off in Yellowstone has cascaded into rivers in just two days, resulting in their overflow.

Park service officials said they will look at conditions in the southern section of Yellowstone, to see when visitors can be allowed back in, but will likely limit admissions to avoid placing too much strain on the area.

The park was the inspiration for Jellystone Park in the 1960s cartoon “Yogi Bear.”

Yellowstone closed for first time in 34 years amid flooding, mudslides