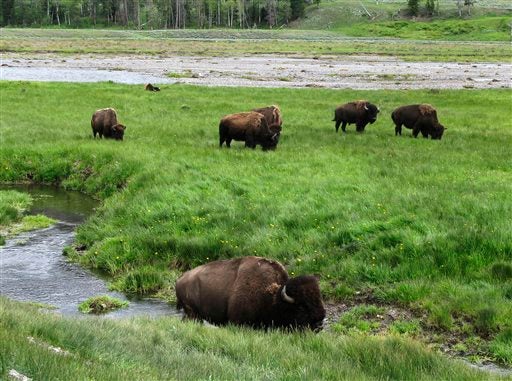 In this June 19, 2014, file photo, bison graze near a stream in Yellowstone National Park in Wyoming. For the second time in three weeks, a bison has seriously injured a tourist in Yellowstone National Park. Park officials say injuries to the 62-year-old Australian aren’t life-threatening though the bison tossed him several times into the air Tuesday morning, June 2, 2015. AP PHOTO

YELLOWSTONE NATIONAL PARK, Wyoming, United States— For the second time in three weeks, a bison seriously injured a tourist in Yellowstone National Park who apparently underestimated how quickly the big, burly animals can move when miffed.

The bison tossed the 62-year-old Australian several times into the air Tuesday morning. The unidentified man was flown by helicopter to a hospital. He had serious but not life-threatening injuries.

The man wasn’t the only person to blame for the encounter, park officials said. Several people crowded the bison as it lay on the grass near a paved sidewalk not far from the famous Old Faithful Geyser.

The man stepped forward and snapped photos with an electronic notepad just 5 feet (1.52 meters) away from the animal, she said.

When the bison charged, the tourist had little chance to escape. Bison can weigh as much as a small car and run three times faster than a person.

Park officials recommend getting no closer to a bison than 25 yards.

It was the second bison attack in Yellowstone since summer tourist season began a month ago. A bison in the Old Faithful area gored a 16-year-old girl from Taiwan as she posed for a picture near the animal May 16.

The girl was treated at a hospital for serious but not life-threatening injuries and released, Bartlett said.

Many believe grizzly bears and wolves are Yellowstone’s most dangerous animals. In fact, bison and elk attack a couple of people in the park every year and are responsible for more injuries, Bartlett said.