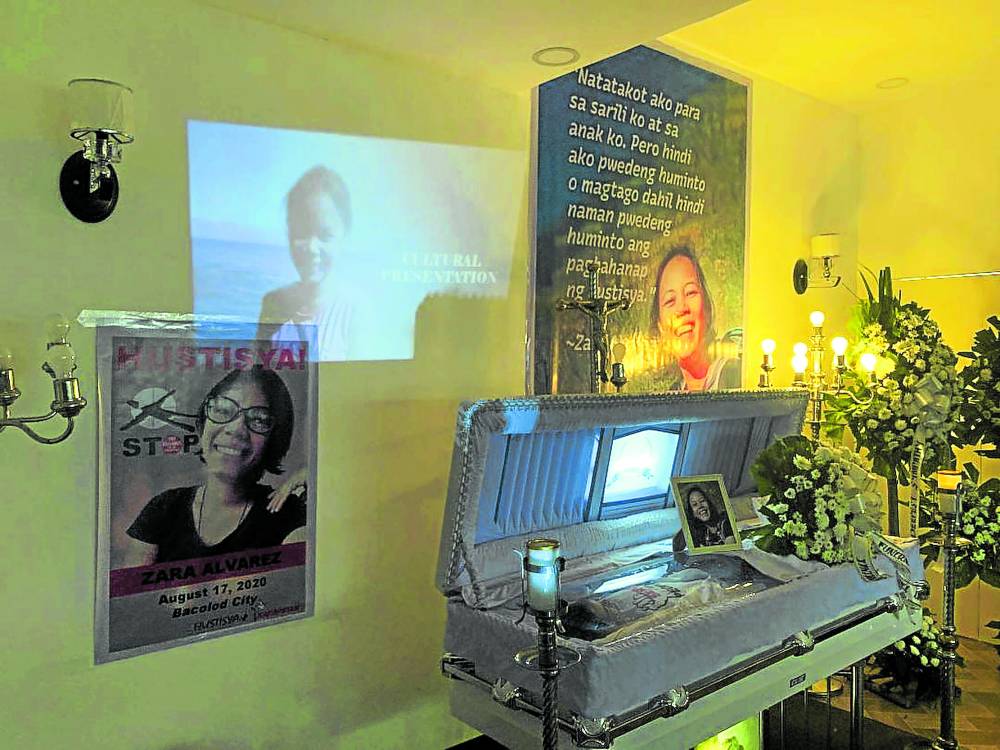 SLAIN ACTIVIST Calls for justice for slain human rights activist Zara Alvarez are posted at the funeral home for her wake. She was gunned down in Bacolod City in August 2020 after she was linked to communist rebels. The anticommunist task force says the lives of people like Alvarez are not in danger. —Photo courtesy of Gino Lopez of Paghimutad

The government’s anticommunist task force on Thursday criticized Justice Secretary Menardo Guevarra for saying that it endangered the lives of people it had Red-tagged, or identified as members or supporters of the Communist Party of the Philippines, the New People’s Army, and the National Democratic Front of the Philippines (CPP-NPA-NDFP).

The National Task Force to End Local Communist Armed Conflict (NTF-Elcac) said it agreed with Guevarra that it should not identify people as members of the communist rebel movement without “solid proof that they are.”

“We, however, do not agree with [him] when he says that the NTF-Elcac endangers people when we do our sacred duty of identifying members of the CPP-NPA-NDF,” said its spokesperson Undersecretary Lorraine Badoy.

“What has grievously endangered our people is all those decades government reneged on its sacred duty, looked the other way and refused to identify members of the CPP-NPA-NDF—even if they already knew who these terrorists were,” she said in a statement.

On Wednesday, Guevarra said that if officials only suspected individuals or groups were linked to the rebels, “then don’t say anything anymore because you’re endangering certain people who might become targets when they are just vocal about their own political views.”

If there is evidence, file cases in court instead, he added.

Incoming National Security Adviser and retired University of the Philippines professor Clarita Carlos had also said that Red-tagging was “unproductive” and should be stopped “because it makes no sense labeling people.”

Carlos said that government efforts were better used in addressing inequality and lack of opportunities for the poor.

Red-tagging is the labeling of certain persons or groups as fronts if not actual members of the communist underground by government and state-sponsored entities or by individuals and organizations supporting the anti-insurgency campaign.

Human rights groups and activists denounce the practice as both harassment and intimidation that lead to fatal attacks.

They cite the August 2020 killing of Zara Alvarez, former education director of human rights group Karapatan and a paralegal staff member on Negros Island in Bacolod City. She was among several activists included on a list of supposed terrorists prepared by the Department of Justice (DOJ) in 2018.

Honey May Suazo, a former Karapatan Southern Mindanao officer, disappeared in November 2019. Prior to her disappearance, then Brig. Gen. Antonio Parlade, who at the time led the AFP civil-military operations, linked Suazo to the CPP-NPA. Parlade was also appointed to the NTF-Elcac.

Lawyer Anthony Trinidad, identified by a local anticommunist group in his hometown as an NPA supporter, was killed on July 23, 2019, in Guihulngan City, Negros Oriental province.

In separate resolutions dated May 25 and published in a newspaper on Wednesday, the ATC designated 11 persons, including NDFP leader Luis Jalandoni, a former priest, as terrorists.

The ATC designated five others with supposed links to the communist movement plus five alleged members of the terror organizations Abu Sayyaf Group (ASG) and Daulah Islamiyah.

The designation was based on “verified and validated information” from the National Intelligence Committee.

It would allow the Anti-Money Laundering Council to investigate and freeze assets and property of the individuals and organizations on the ATC list.

In December 2020, the ATC formally designated the CPP, the NPA, the Islamic State East Asia, Maute Group, Daulah Islamiyah and other associated groups as “terrorist organizations, associations and/or groups of persons.”

In February and April last year, the ATC designated as terrorists 19 people accused of being central committee members of the CPP and 10 alleged leaders of violent extremist groups operating in Mindanao.

They included CPP founding chair Jose Maria Sison and his wife Julieta, who are self-exiled in the Netherlands, and others who had served as NDFP peace panel consultants.

Under the ATA, those on the so-called terror list may file for delisting within 15 days after their designation had been published.

Designated terrorists risk waiving their right to file a request if they will not seek delisting within the period, Justice Undersecretary Adrian Sugay said last year.

He said, however, that “judicial recourse is always an option.” —WITH A REPORT FROM INQUIRER RESEARCH