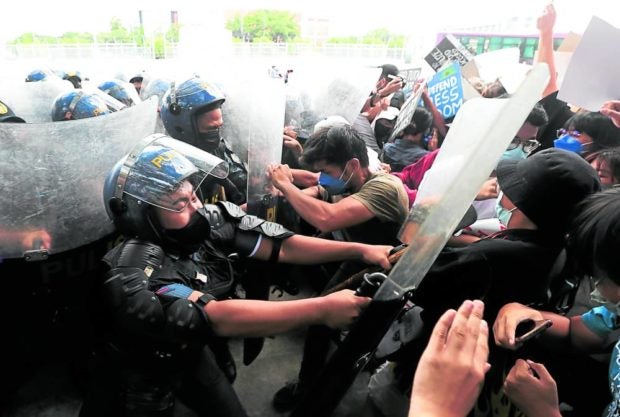 FILE PHOTO Riot policemen get rough with insistent protesters on the road to the Batasang Pambansa where President-elect Ferdinand Marcos Jr. was proclaimed on Wednesday.—NIÑO JESUS ORBETA

MANILA, Philippines — The current leadership of the Philippine National Police may learn a thing or two about the protest movement from the book of its former chief, Guillermo Eleazar, who had tried to reach out to both critics and supporters of the administration, an activist group said on Thursday.

In a statement, Bagong Alyansang Makabayan (Bayan) said that Eleazar, who recently ran but lost in his bid for the Senate, had tried to reach out to protesters to ensure peace and order during movements and programs.

“The current PNP leadership is unlike that of Gen. Guillermo Eleazer who always reached out to protesters at the earliest possible time to come up with agreements and ensure that the day ends peacefully,” Bayan secretary-general Renato Reyes said.

“As a result, there were hardly any untoward incidents and people were able to express themselves,” he added.

INQUIRER.net has sought the PNP’s side regarding Bayan’s views of Danao and de Leon, but the police force has not yet responded as of posting time.

“All we’re hearing now from the PNP are threats and atrocious interpretations of the law. Danao and de Leon could learn a thing or two from Gen. Eleazar,” Reyes claimed.

Former PNP chief Eleazar was also contacted for his reaction to Bayan’s comparison, but he has not given any statement.

However, this is not the first time Bayan and PNP’s opinions on rallies clashed. During Congress’ proclamation of winners in the 2022 polls, activists held a rally at the Commission on Human Rights (CHR) grounds, which led to a brief scuffle.

Activists claimed that police used water cannons, but Danao clarified that they were only doused with water as they kept on moving towards Commonwealth Avenue, aside from kicking the riot shields of the Civil Disturbance Management (CDM) personnel.

After this — as the police force was preparing for the transition of the new administration — the PNP leadership warned again that rallies near the inauguration site of President-elect Ferdinand “Bongbong” Marcos would not be allowed. Danao also said that if rally attendees were chanting long live to Marcos, then they would be brought near the venue.

But Bayan asked whether PNP favors a specific camp, noting that the right to free speech and peaceful assembly does not discriminate.

De Leon on Wednesday downplayed accusations that the police force is trying to control the content of the rallies, saying that people have a right to air their grievances — but in freedom parks only, if no rallies would be given.

But Reyes countered that it seems futile to apply for a permit as the PNP is not likely to endorse it because the police allegedly discriminate against left-leaning groups.

“The right to peaceful assembly is guaranteed for all regardless of political beliefs. Being from a left-leaning group should be immaterial when it comes to exercising one’s constitutional right to peaceably assemble,” Reyes said.

“It is now clear that the PNP is discriminatory hence any application for a rally permit is doomed because the PNP will recommend its denial. Applying for a permit will become an exercise in futility because the applicant has already been pre-judged by the PNP. The LGU will be constrained to deny the application,” he added.