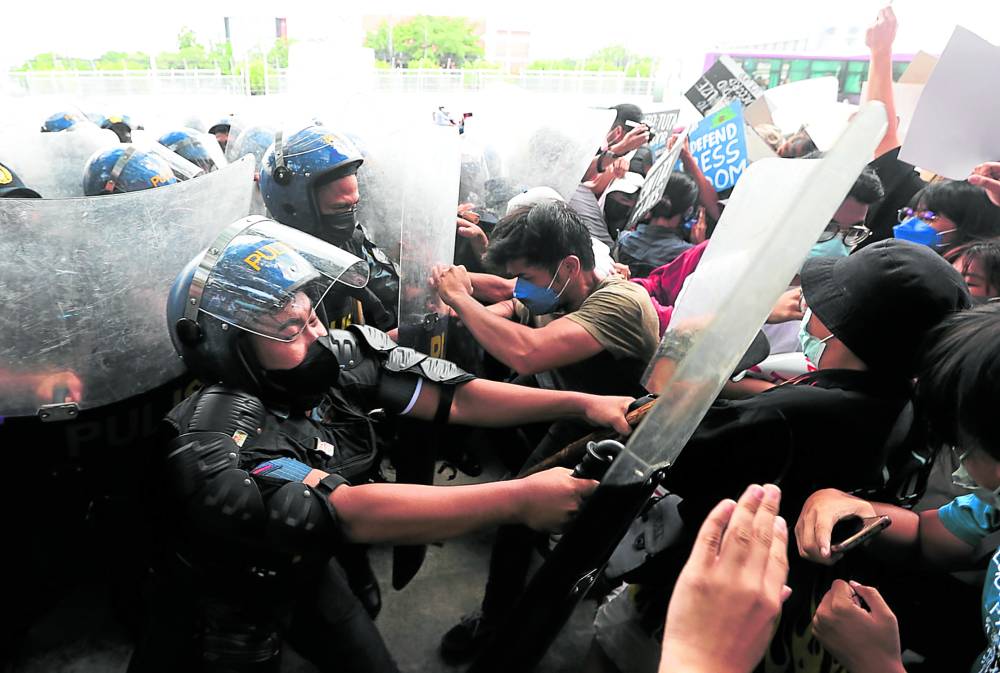 During his speech at the flag raising ceremony at Camp Crame on Monday morning, Danao called out accusations saying that the dispersal done by the Civil Disturbance Management (CDM) of the National Capital Region Police Office (NCRPO) and the Quezon City Police District (QCPD) was overkill.

According to him, it was the rally attendees at the Liwasang Diokno of the Commission on Human Rights (CHR) who started the scuffle first.

“That’s professionalism at its best.  Some have accused our CDM personnel of doing an overkill last Wednesday but we are always ready to face them; what is saddening here is that our critics have failed to mention the fact that the melee was started by the protesters who broke some of our CDM equipment and tried to march to a place where there should not be (rallies),” Danao said.

The acting police chief further stressed that the protesters were the ones harassing the police officers, and not the other way around, as some sectors have suggested.

“Last Wednesday, a group of unruly protesters tried to disrupt the proclamation as they repeatedly taunted our [CDM] personnel with unsavory words.  Our men, many of them proud husbands, mothers, fathers, brothers, and sisters to all, did not mind them,” Danao said.

“As different videos have shown, the fire department merely doused them with water.  However, despite being soaked, protesters keep and waggled the shields of our CDM personnel, sparking a brief scuffle.  It was evident that they were harassing our policemen that were merely doing their job, but to their credit, the NCRPO and QCPD personnel really acted with professionalism,” he added.

The way PNP personnel dispersed protesters last Wednesday drew the attention of the CHR, who said that its investigation offices will look into the methods employed by the police — especially the use of water cannons to counter protesters.

CHR said that using water cannons and carrying firearms during peaceful protests are prohibited by Batas Pambansa Blg. 880, which allows for peaceful assembly of people to air their grievances.

Hours after the incident, PNP said in a statement that they have only exercised maximum tolerance in managing the protests amid Congress’ proclamation of President-elect Bongbong Marcos and Vice President-elect Sara Duterte-Carpio, noting that protesters ‘went overboard’ as they tried to leave CHR grounds.

Danao doubled down on these assertions, saying that they had no choice but to move fast to prevent protesters from lambasting the country’s leaders.

“We really have to differentiate what is right and what is wrong in a democratic country like ours.  When people have no other intention but to lambast our leaders and try to create trouble that may spill into the streets, and we have to move fast,” he said.

“When protesters tried to launch action that will directly affect other people’s lives and properties, and even contribute to our traffic problem, we have to do our part — that is part and parcel of the PNP,” he added.

He also called on police offices across the country to remain professional in dealing with protesters.

“Thus, I am calling on the entire police force to remain united and act with professionalism in dealing with similar incidents in the future.  Maximum tolerance is our policy, but we will see to it that the rule of law will always be followed in the event protesters would start creating trouble,” Danao said.

“We will always allow them to have their peaceful assembly in the so-called freedom parks, and with permits from local government units.  However, we have to prevent them from even moving an inch outside of these authorized rally zones, those who will go overboard in their actions and march outside the freedom parks have to face the rule of law, as we try to keep peace and order always,” he added.

Last Wednesday, Congress proclaimed Marcos as president, as he got 31,629,783 votes, way ahead of closest competitor Vice President Leni Robredo with 15,035,773 votes.  However, several progressive and opposition groups claimed that the elections were rigged, even if various groups have already said that the polls were clean.