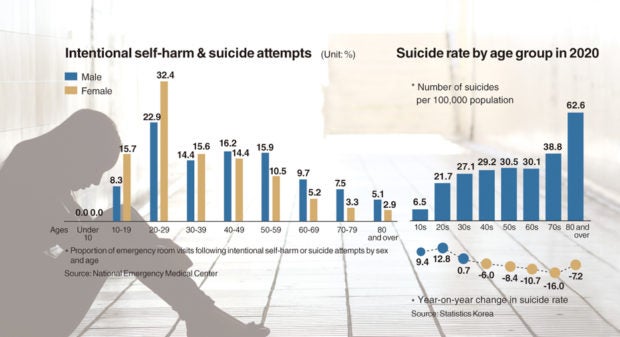 SEOUL — Suicides among young people, especially women, increased during the first year of the COVID-19 crisis in 2020, despite a drop overall in South Korea.

The number of suicides fell by 604 to 13,195 in 2020 compared to the previous year, according to the Ministry of Health and Welfare’s report published Tuesday. The ministry said preliminary data from 2021 indicated a continued declining trend.

Contrary to the declining trend, suicides were up in women and young people under the age of 30.

Women also made up 60.7 percent of 34,905 people taken to emergency rooms with deliberate self-harm or suicide attempts in 2020, about 1.54 times that of men, the National Emergency Medical Center’s data showed.

Women in their 20s, in particular, had the highest rate of ER visits following both nonfatal suicide attempts and suicides at 32.4 percent, followed by their male peers at 22.9 percent.

While women made more suicide attempts than men, more men lost their lives to suicide. In 2020, men died by suicide or self-harm more than twice as often as women.

Increasingly more young Koreans are dying by suicide even before the pandemic hit.

In a closed-door briefing Tuesday, Won So-yoon, head of the ministry’s suicide prevention policy division, told reporters that the reasons for the increases or decreases in suicides in particular groups were “difficult to pinpoint.”

The findings from the psychological autopsies, conducted by a ministry-run foundation established last year for mental health and suicide prevention, are not yet available, she said.

For most of the last two decades, Korea has had the highest suicide rates in Organization for Economic Cooperation and Development except for 2016 and 2017, when it came second to Lithuania. Korea’s suicide rate is more than double the OECD average of 11 per 100,000 population.