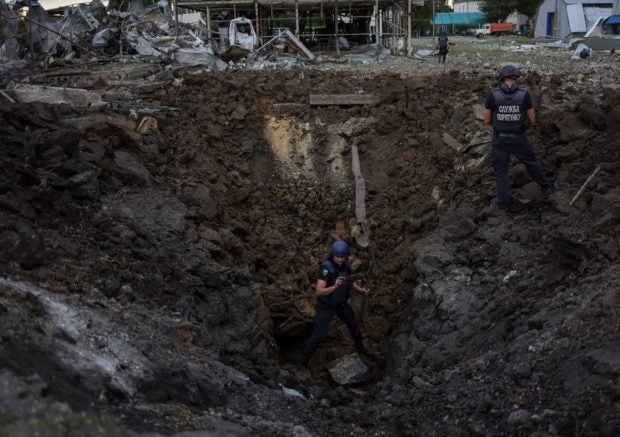 Experts work in a crater after a Russian missile strike, amid Russia’s invasion on Ukraine, in the town of Pokrovsk, in Donetsk region, Ukraine June 15, 2022. REUTERS

KYIV — Ukraine said it urgently needed more weapons to fend off Russian advances in the south and the east, an appeal aimed at the West as the leaders of Germany, France and Italy are expected to visit Kyiv on Thursday.

Moscow has focused most of its firepower on the eastern city of Sievierodonetsk while also trying to consolidate control over southern territory encompassing the strategic city of Kherson, north of the Black Sea.

Ukrainian soldiers are fighting to retake ground in wheat fields and empty villages along a deserted motorway between the city of Mykolaiv and Russian-occupied Kherson.

Major-General Dmytro Marchenko, who leads Ukraine’s forces in Mykolaiv, said his troops could achieve victory over Russia if they are given the right weapons.

“It is clear that this will not end soon. But then again, if we are given all the weapons that we need, the counter-offensive could well be over by the end of the summer,” Marchenko told U.S.-backed broadcaster Radio Free Europe/Radio Liberty.

Kherson fell to Russian forces in March, soon after Moscow invaded on Feb. 24 in what it describes as a “special military operation” to disarm and “denazify” Ukraine. Kyiv and its allies call this a baseless pretext for a war that his killed thousands and uprooted millions. 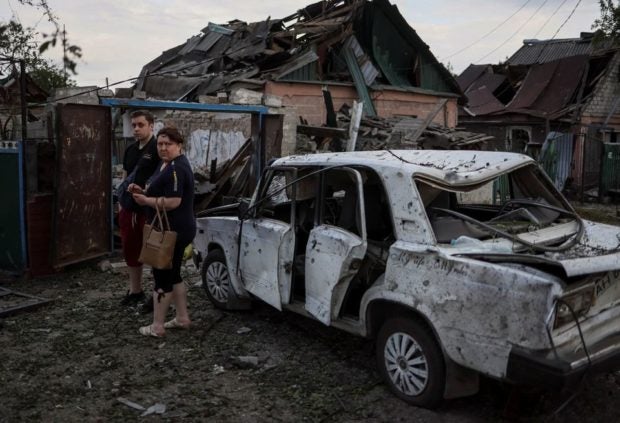 After being pushed back from the outskirts of Kyiv in May, Russia’s troops have focused their efforts on capturing the entirety of the Donbas, an industrial region where fighting has focused in recent weeks on Sievierodonetsk, now largely in ruins.

Russian President Vladimir Putin appears intent on asserting complete control over the Donbas, parts of which are held by Moscow-backed separatists in Luhansk and Donetsk provinces.

Ukrainian troops holed up alongside civilians in a Sievierodonetsk chemical plant ignored a Russian ultimatum to lay down their arms on Wednesday. The city’s mayor, Oleksandr Stryuk, says Ukrainian troops were still defending the city, even though all of its river bridges have been destroyed.

Ukraine says more than 500 civilians, including 40 children, remain alongside soldiers inside the Azot chemical factory, sheltering from weeks of Russian bombardment. Separatists in the area say up to 1,200 civilians may be inside.

Moscow said it had opened a humanitarian corridor from Azot on Wednesday to allow civilians to escape to Russian-controlled territory. It accused Ukraine’s forces of disrupting that plan and using civilians as human shields, which Kyiv denies.

“There are no obstacles for civilians to leave… except for the decision in principle by the Kyiv authorities themselves,” Russia’s defence ministry said in a statement. Reuters was unable to verify that claim.

Serhiy Gaidai, governor of the Luhansk region, said Ukraine’s army was defending Sievierodonetsk and trying to stop Russian forces from taking its twin city Lysychansk on the opposite bank of the Siverskyi Donets river.

Reuters could not immediately verify the battlefield accounts. 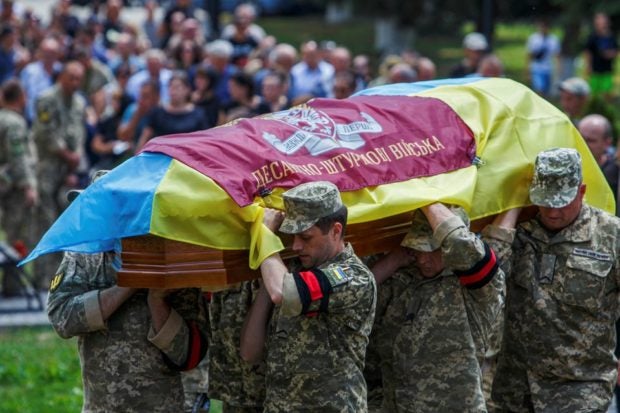 Ukrainian servicemen carry a coffin with a body of Ruslan Ferenci, 41, their comrade who was killed in a battle, as Russia’s invasion continues, during a funeral ceremony in Uzhhorod, Zakarpattia region, Ukraine June 15, 2022. REUTERS/Serhii Hudak

Leaders including U.S. President Joe Biden have announced new arms packages for Ukraine in recent days, following appeals by Kyiv for help on the eastern and southern fronts.

Biden pledged $1 billion worth of new aid on Wednesday, including anti-ship rocket systems, artillery rockets and rounds for howitzers. NATO Secretary General Jens Stoltenberg said the alliance was “extremely focused on stepping up support” for Ukraine.

While Ukraine has welcomed the new pledges, it says deliveries are not coming fast enough.

Recent deliveries of M777 Howitzers from the United States have been too few and that Ukraine remains numerically outgunned, officials said.

“I know we have it. I’ve seen how it works. But there’s not a lot of it working yet,” an engineer manning a Soviet-designed artillery piece hidden under a bridge northwest of Kherson said of the new Western equipment.

Weapons provisions are likely to dominate discussions during Friday’s visit to Kyiv by leaders of the European Union’s three biggest countries.

The visit by German Chancellor Olaf Scholz, French President Emmanuel Macron and Italian Prime Minister Mario Draghi has taken weeks to organise with the three men looking to overcome criticism within Ukraine over their response to the war. The expected trip has not been announced for security reasons.

Speaking in Romania on Wednesday, Macron said it was time for Europe to reassure Ukraine over its EU ambitions.

“We are at a point when we need to send clear political signals, us Europeans, towards Ukraine and its people when it is resisting heroically,” he said, without giving details.

On Friday, the European Commission is due to make a recommendation on Ukraine’s status as an EU candidate, something the biggest European nations have been lukewarm about.

UN warns against adoption of Ukrainian children in Russia