Robin Padilla: Debates with wife prepared me for Senate 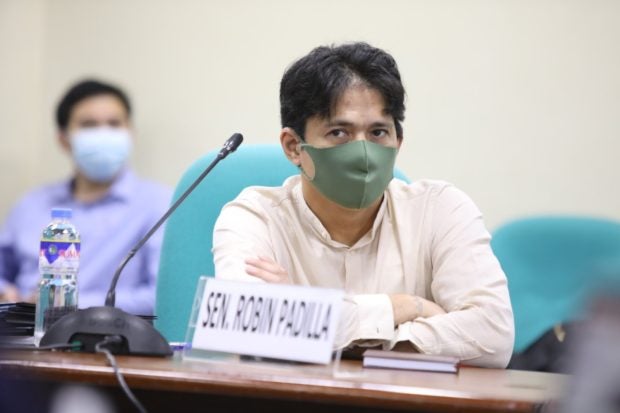 MANILA, Philippines — Debating with your spouse and talking in English with your kids will prepare you for deliberations in the Senate.

At least that is how actor Robin Padilla, the new senator who was elected with the highest number of votes, half-jokingly explains how he has prepared for his new role.

Padilla on Tuesday said he feels “100-percent ready” for his job as one of the country’s 24 senators.

He did not say what topics he debated with his wife, actress Mariel Rodriguez, and the banters he has been having with their two young daughters, one of them still a toddler, to sharpen his English-speaking skills.

The 52-year-old freshman senator, who was at the Senate on Tuesday for a briefing on the legislative process, was confident that he could ably take on the job of a legislator, and that with his willingness to learn, everything would be easy.

“If only they would let me assume office now, I am ready. I am used to having debates every day, only it’s with my wife,” he said, drawing laughter from reporters.

Padilla said he is also ready to exchange views with fellow lawmakers on the Senate floor, albeit in Filipino.

“Una, hindi naman Amerikano mga kaharap ko para mag-English ako. Siguro kung Amerikano, (First of all, I am not facing Americans that I need to speak in English. If they were Americans) well, I’m willing to debate,” he said.

“Pero mga Tagalog sila eh, eh ’di Tagalog tayo (But all of them speak Tagalog, so let’s use Tagalog),” he said.

According to the 1987 Constitution, the country’s official languages are Filipino and English. Tagalog is the primary basis of the Filipino language.

Padilla does not see that his English-speaking skills will be a problem for him during the Senate’s sessions and hearings.

“I’ve been having English lessons for some time now, with my 2- and 4-year-old kids,” he said in Filipino, a smile creasing his eyes above the green mask he was wearing.

Turning to the serious work placed on his shoulders by the people, he said he will “amplify their voice” in the Senate.

“To all those who voted for me, as well as to those who did not, to all the 115 million Filipinos, I am here to represent you. That’s my role. That’s the mandate you have given to me, and everything that I will do, I will do it not for myself but for you,” he said.

Padilla, who was elected to office for the first time, topped the senatorial race against 63 other candidates in the May 9 elections with 26.45 million votes, nearly 2.5 million more than second placer Loren Legarda, who is returning to her Senate seat.

Padilla attended an almost three-hour exclusive briefing at the Senate to complete his three-day “customized program” with the Development Academy of the Philippines (DAP) called “Executive Mentoring on Legislative Governance: Setting the Tone for the First 100 Days.”

He was occasionally taking notes while listening to legislative officers led by Senate deputy secretary Edwin Bellen as they discussed committee procedures and processes.

“Nothing could be more important for me than to learn about this Upper Chamber of Congress,” he told reporters afterward, adding that he would try to keep learning because this was demanded by his new job.

“They [at DAP] told me I need some prior exposure here in the Senate,” he said.

Padilla said he had not talked to his colleagues about the leadership composition of the next Senate, as well as the committee chairmanships.

But he was not concerned about having to rush to learn the job of a lawmaker.

“Everything is easy. Nothing is difficult if you want to do it,” he said.

Padilla conceded, however, that he was not used to the expected heavy workload ahead.

Padilla, who previously said he wanted to chair the Senate committee on constitutional amendments, said the shift to federalism would be first on his agenda.

“It is a daunting task if one does not know what to do. But for me, I know what I will do, with the help of our lawyers who will guide us,” he said.

Padilla does not feel burdened by the heavy responsibility.

“It is our people who are burdened by the need to change our Constitution,” he said.

Senator-elect Robin Padilla to debate in Filipino: ‘I won’t be facing Americans’