Negros PUV drivers set ‘holiday,’ eye other jobs to get by | Inquirer News

Negros PUV drivers set ‘holiday,’ eye other jobs to get by 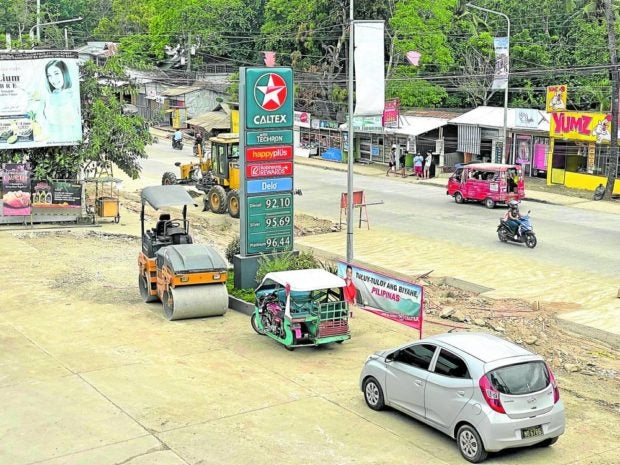 PROVINCIAL PRICES | Outside Metro Manila, the pinch is just as painful. At fuel stations in Puerto Princesa City, Palawan, the highest pump prices range from P96.44 to P98.90 per liter as of Tuesday. (Photo by ROMAR MIRANDA)

The incessant increase in the pump prices of petroleum products has considerably eroded the income of drivers and operators of public utility vehicles (PUVs) as they now have to set aside a big chunk of their earnings to buy fuel.

And unless the government approves the petitions of transport groups across the country for a fare increase as fuel prices near the P100-a-liter mark, many drivers will be forced off the streets.

Some 1,800 jeepney drivers in Negros Occidental have already decided to hold a “drivers’ holiday” or work stoppage starting June 15.

“It is no longer viable for us to (continue operating and) make a reasonable profit,” said Diego Malacad, secretary-general of the United Negros Drivers and Operators Center.

He said the “holiday” would continue until fuel prices have dropped to a profitable level.

In the meantime, Malacad said drivers were taking odd jobs as construction workers, farmers, and fishermen to feed their families.

Diesel prices in the provincial capital of Bacolod City now range from P85 to P91 a liter, while gasoline is at P81.

Albert Villanueva, chair of the Sentrong Samahan ng mga Tsuper at Operators Negros, said the “driver’s holiday” would not paralyze public transport in the province since other groups were not joining, including his and that of the Federation of Bacolod City Drivers.

If jeepney driver Mark Anthony Velarde had a choice, he would rather go back to his province in Isabela and farm instead of dealing with the daily grind of driving a PUV.

“It’s been really difficult lately. From just P1,500, I now have to spend P2,000 for fuel that will last for six round trips from Cubao to Pasig,” said the 34-year-old Velarde.

He takes home around P500 a day, which is below the daily minimum wage in Metro Manila.

Delivery rider Jonjon Bacani, 50, has resorted to taking jobs on the side to make ends meet.

“We do extra work and help our co-riders who have many items to deliver,” Bacani told the Inquirer, noting that his fuel expenses had doubled to P400 for four days of using his motorcycle.

In Puerto Princesa, tricycle driver Rodney Tabang, 48, said his take-home pay shrank to only P300 a day, which was not enough to support his family of five.

“We will really go hungry if fuel prices continue to increase,” Tabang said.

Figures from the Department of Energy showed that the highest prevailing retail pump prices in the country were in Puerto Princesa City, ranging from P96.44 to P98.90 a liter.

Jeepney drivers in Dagupan City in Pangasinan, meanwhile, are forced to operate only during peak hours, mostly in the morning, to cope with the impact of skyrocketing fuel prices.

Bernard Tuliao, president of the Alliance of United Transport Organization of Pangasinan, on Tuesday said it was only at the start of the day that they have a chance to earn since their passengers were mostly workers, students, and residents going to the markets.

“After lunchtime, there are almost no passengers on the streets, and it’s just a waste of fuel to ply our routes,” Tuliao told the Inquirer.

He added that some jeepney operators preferred to operate in the afternoon when workers and students return home.

According to Tuliao, they were thankful for the P1 increase in the minimum fare but added that they were still waiting for the promised hike of P3.

In Bulacan province, tricycle drivers were also appealing for a fare hike due to rising fuel costs.

Rex Garcia, president of the Bulakan-Crossing Tricycle Operators and Drivers Association, said they were still charging passengers P10 each for short trips, which he described as “obsolete.”

“The minimum fare should already be between P15 and P18, considering the surging fuel prices,” Garcia said.

“Almost all of our entire income goes to gasoline alone. There’s barely enough [left] to pay for our food,” Acosta said.

Jose Cular, a 56-year-old motorcycle-for-hire driver and operator in Tacloban City, Leyte province, said he could barely earn P300 a day, which was not enough as high fuel prices also caused prices of basic commodities to rise as well.

Eleazar Durang, a tricycle driver based in Tagbilaran City, Bohol province, said that of the P1,000 he earned in a day, at least P400 went to fuel.

Joel Pillogo, Camarines Sur coordinator of Condor-Piston Bicol, said in a phone interview with the Inquirer on Tuesday that the unceasing fuel price hike was like a “death sentence.”

“The government is slowly killing us. The jeepney drivers are hungry because of the increase in prices of petroleum products,” Pillogo said.

He said some jeepney drivers stopped plying their routes because they were not making enough profit, noting that earning P200 a day was already difficult.

It’s the same situation in Occidental Mindoro with fuel prices ranging from P84 to P90 a liter.

Pump prices of fuel may reach P100 per liter