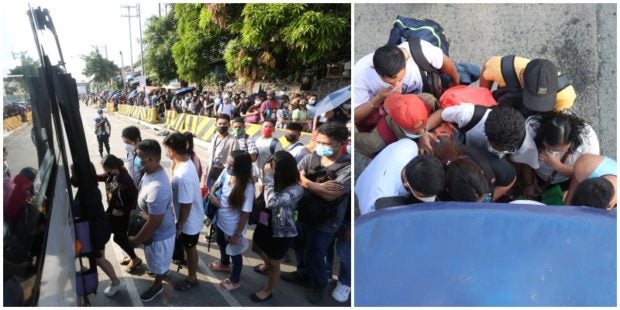 ROUTINE BECOMES ORDEAL | Hundreds of commuters are forced to wait longer than usual for their ride in scorching heat along Commonwealth Avenue in Quezon City on Tuesday, a scene replicated in other parts of the metropolis, due to a shortage of public utility vehicles (PUVs). There was no transport strike, but the jeepney group Piston said it observed that a growing number of PUV drivers had opted to quit their jobs as the successive fuel price increases shrunk their income. (Photos by NIÑO JESUS ORBETA / Philippine Daily Inquirer)

MANILA, Philippines — Ethel Sorongon, a Grade 2 teacher at a public elementary school in Quezon City, used to spend P5,000 a month on fuel.

Sorongon’s home in Nagkaisang Nayon, Quezon City, is only about 7 kilometers away from the school where she teaches, but she invested in a car because “if I take the [usual route for commuters], I would be late for work.”

But with the spiraling cost of gasoline and diesel, she now has to budget P10,000 for fuel alone.

“Instead of saving the extra money from my [monthly] salary, there would be nothing left because my gas expenses almost doubled,” she said in a phone interview.

“It’s hard, especially since I am a teacher,” Sorongon lamented, adding that if it was not for her husband’s help meeting their monthly dues, she would have gone back to commuting again.

However, commuters and public utility drivers are in no better position than Sorongon’s and suffer just the same.

Along Commonwealth Avenue, one of Metro Manila’s major thoroughfares, long lines of commuters are a common sight due to the lack of public utility vehicles (PUVs) and jeepneys, which a transport group said was a result of skyrocketing prices of fuel.

The Pinagkaisang Samahan ng mga Tsuper at Operator Nationwide (Piston) noted that people were finding it hard to get a ride to go to work despite the government’s “Libreng Sakay” program.

For Piston deputy secretary general Ruben Baylon, this was their observation because transport workers, particularly drivers, have been forced to quit their day jobs due to the continuous rise in fuel prices.

He said the lack of PUVs and jeepneys could be caused by drivers choosing to quit because the additional fuel costs had eaten up all their earnings.

This was exacerbated by the fact that commuters chose to avail themselves of the “Libreng Sakay” program, which the Piston leader acknowledged was logical since passengers would save money on public transportation.

“It’s a heavy toll that we are taking. None of us wanted this but the drivers can no longer afford this,” Baylon told the Inquirer, as he renewed their call to suspend the fuel excise and even the repeal of the oil deregulation law.

Various other groups have also urged the government to suspend the fuel excise to help ease the burden of high oil prices on consumers.

However, President Rodrigo Duterte remained firm in not suspending the tax despite the unending increase in oil prices, Malacañang said on Tuesday.

Acting presidential spokesperson Martin Andanar said Duterte would let the incoming administration decide on whether to heed the call of various groups to suspend the excise tax.

“The position of the President in March, even his economic team, has not changed,” Andanar said at a Palace briefing.

In March, Duterte rejected calls to suspend the excise on fuel products and instead approved a subsidy of P200 a month for each household.

Andanar pointed out that the excise tax collections were needed to fund the salaries of teachers, the “Build, Build, Build” infrastructure program, and other undertakings of the government.

“We’ll leave it to [the administration of President-elect Ferdinand Marcos Jr.] to decide” on calls to suspend the fuel tax, he said.

In an interview with select media on May 26, Marcos Jr. said the government would find other ways to cushion the impact of rising fuel prices instead of suspending the excise on oil products.

Sen. Grace Poe on Tuesday called on the Land Transportation Franchising and Regulatory Board (LTFRB) and the Department of the Interior and Local Government to submit the list of vetted names of beneficiaries of fuel subsidy in the public transport sector amid the latest big-time price increase on fuel.

Poe, chair of the Senate committee on public services, was dismayed that months of sluggish response from concerned government agencies had pushed the country’s public transport sector to the edge.

“A number of (PUV) drivers and operators are set to stage a wide-scale transportation strike should the problem of rising prices of petroleum products not be sufficiently addressed,” she said in a statement. 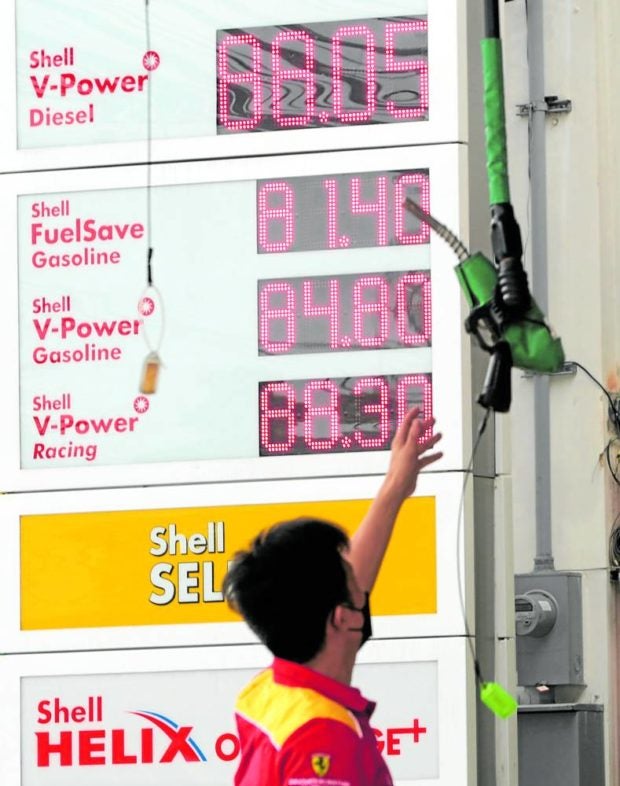 HIGHER AND HIGHER A service attendant reaches for a fuel pump at a gasoline station along Edsa in Quezon City on Tuesday, the day oil companies implemented the latest in a series of price increases to the detriment of drivers and commuters. —GRIG C. MONTEGRANDE

Poe lamented that the string of price increases of petroleum products started in January, while the government announced its plans to disburse fuel subsidies as early as February.

“Almost half of the year has gone by without sufficient relief. We are anticipating an immediate response from the government,” she said.

The senator recalled that she had fought for a P2.5-billion fuel subsidy provision for PUVs in the 2022 General Appropriations Act.

“We fervently pushed for the allotment of funds that our public transport drivers and PUV operators can use to help them brave crises, such as this one we are going through right now,” she said.

Poe expressed disappointment that the fund allocation had not been fully disbursed even as the country is dealing with a crisis of “epic proportions.”

Surging fuel prices already pushed the inflation rate in May to a 42-month-high of 5.4 percent, breaching the upper end of the government’s 2-4 percent target range. It was the highest since November 2018.

With inflation expected to further heat up instead of cool down in the remainder of this year, the government initiated remedial measures to address the impact of rising prices on consumers.

President Duterte’s recent order extending the lower tariffs on pork and rice while reducing duties on corn and coal to allow more imports would augment the food and energy supply and help ease inflationary pressures, according to Socioeconomic Planning Secretary Karl Kendrick Chua.

Duterte issued Executive Order No. 171 to modify tariff rates for pork, corn, rice, and coal. It also temporarily eliminated the 7-percent import tariff rate on coal — an important raw material in the generation of electricity — to help maintain or lower electricity prices.

The government has likewise increased the total budget for targeted subsidies to P6.1 billion to help cushion the impact of higher fuel prices on the most vulnerable.