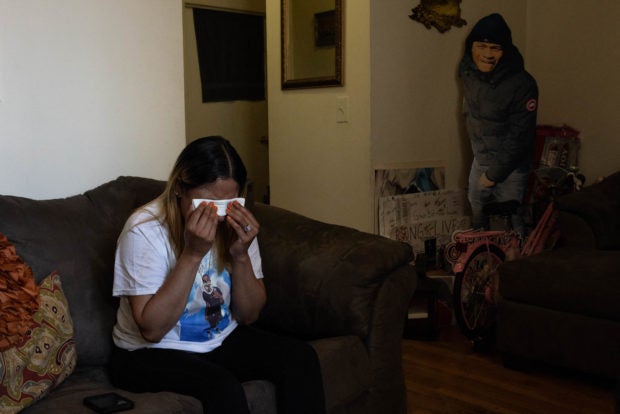 Lezandre Khadu, a mother of Stephan Khadu who died in Rikers Island prison complex in Queens, New York in September 2021, cries while telling stories about her son Stephen during the interview at her house in Brooklyn, New York on May 26, 2022. AFP

NEW YORK—Lezandre Khadu knows all too well the pain that New York’s Rikers Island prison can cause. Her son, Stephan, died there — one of about 20 deaths at the jail in the past 18 months.

“He died from an inhumane system,” says the 39-year-old, weeping during an interview with AFP in her Brooklyn apartment.

Rikers has long had a reputation for unsanitary conditions and violence but is now arguably facing its most intense scrutiny ever following the deaths, which included suicide, drug overdoses and medical emergencies.

Last month a local court found the Department of Correction (DOC) in contempt for denying detainees access to medical care.

Separately, a federal judge decided not to strip control of the prison from the city but ordered officials to come up with a plan to fix the crisis at the sprawling complex.

For Khadu, any reforms are too late. She says her son was a healthy young man in December 2019 when he entered Rikers, situated in the East River between the Bronx and Queens boroughs.

He had been arrested on charges of conspiracy to commit murder. Like the vast majority of prisoners he was awaiting trial and presumed innocent.

After a few months, Stephan was transferred to a nearby overflow facility — a barge nicknamed “The Boat.”

Khadu says Stephan began suffering seizures in July 2021. She blames a pepper spray that guards use on inmates to restore order called the “cell buster.”

Stephan spent a few days in hospital before being returned to his cell.

On September 22, an inmate found Stephan bleeding from the mouth. He was hospitalized and died that day.

The city’s medical examiner ruled that Stephan had died from a meningitis infection, a treatable condition, leading to questions about the level of care he received in jail.

Khadu says corrections officers failed to give her son adequate medical attention, claiming he was alone for almost two hours before guards tended to him.

“Nobody cared. My son would still be here if they just would have cared. He didn’t go to jail to die,” she says.

A DOC spokesperson said Stephan’s death is “under investigation.”

Sixteen people died in or shortly after leaving New York City jails last year, the highest number of reported deaths since 2013, and almost all at Rikers.

“Every death in custody is a tragedy,” Louis Molina, who was appointed prisons commissioner in January, told AFP in a statement.

“We are working aggressively to improve the conditions at Rikers that began under previous administrations and are committed to ensuring the safety and wellbeing of everyone who works and lives in our facilities,” he added.

Lawmakers and ex-inmates say conditions at Rikers worsened dramatically during the pandemic, largely due to widespread staff shortages.

“It’s a horror story in there and it’s heartbreaking,” the 58-year-old told AFP, citing gang violence, crumbling buildings and dirty toilets that flood.

They are overwhelmingly from Black and Hispanic communities. Many suffer from mental health issues.

Lawyers and criminologists have called for the complex’s closure for years, citing its age, reputation for violence and remote location.

New York City’s previous mayor, Bill de Blasio, announced plans to shut the site by 2026 under a $8.7 million proposal to replace it with smaller facilities.

His successor Eric Adams backed the plan during his election campaign but has been quiet in office on whether he intends to go through with it.

Khadu, a regular at anti-Rikers protests, says she say will campaign for the prison’s closure “until I literally die.”

“I don’t even know how to do anything other than that now. I’m not just speaking for my son. I’m speaking for all the sons,” she says.