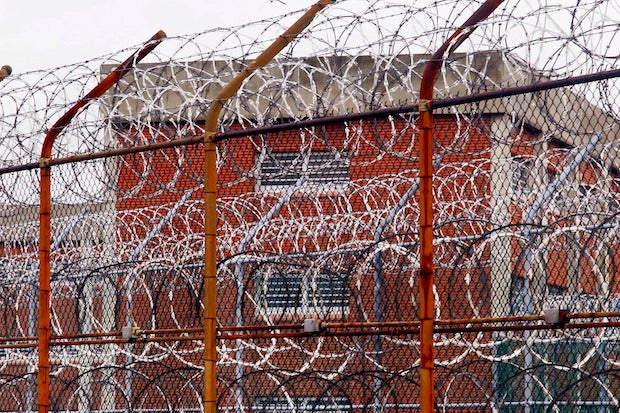 Something was wrong. The chow hall line at New York’s Rikers Island jail had halted. For three hours, the men stood and waited, without food, until a correctional officer quietly delivered the news: A civilian chef was among those who tested positive for the coronavirus.

“We was like, ‘What? The cook?’” said Corey Young, who spoke to The Associated Press last week by phone from Rikers. He and others wondered if the chef had sneezed on trays or into the food. Some men later floated the idea of a hunger strike to protest.

“I don’t want to eat nothing that comes from the state,” Young said. “They are not going to take care of us properly here.”

Health experts say prisons and jails are considered a potential epicenter for America’s coronavirus pandemic. They are little cities hidden behind tall fences where many people share cells, sit elbow-to-elbow at dining areas and are herded through halls to the yard or prison industry jobs.

They say it’s nearly impossible to keep 6 feet away from anyone, adding to tensions. Medical services behind bars have long been substandard and even hand sanitizer is considered contraband in some facilities because of its alcohol content.

More than 2.2 million people are incarcerated in the United States — more than anywhere else in the world. But the threat posed by COVID-19 behind bars extends well beyond prison walls.

Even though most personal visits have been stopped, hundreds of thousands of guards, wardens and other correctional facility administrators go in and out 24 hours a day, potentially carrying the virus home to their families and communities.

And — as the incarcerated understand better than anyone — jail and prison employees are also the ones most likely to bring the virus into overflowing facilities already grappling with older men and women, those suffering from chronic health conditions and the mentally ill.

The first positive tests from inside America’s correctional facilities started trickling out two weeks ago, with more than 300 cases now confirmed in New York, California, Michigan, Alabama and a dozen other states.

But information and transparency about the number of infections are lacking, and some in custody are afraid to report symptoms because they’ve seen others being placed in solitary confinement for doing so, several men said in interviews with the AP.

Many correctional departments across the country do not even identify affected facilities, let alone name those who test positive, citing privacy concerns.

Most of the coronavirus cases in jails and prisons so far have been reported from New York City, with the Department of Corrections saying Friday that 80 staff and 103 men in custody have tested positive at Rikers Island and city jails alone — quadruple what was reported just a week ago.

He called for authorities to “rapidly empty these facilities of everyone with risk factors for serious illness and death, and create pathways to hospital-level care.” If nothing is done, he said, people will die and the virus will spread faster.

Already, New York, Ohio, Florida and a handful of other states have started letting some people out — the elderly, pre-trial detainees, those being held on technical violations and low-level offenders who are at high-risk of severe illness.

But some health advocates say thousands more need to be freed. Meanwhile, youth justice groups in nearly two dozen states are also calling for the release of detained and incarcerated juveniles and a halt to new admissions.

However, new men and women continue to cycle in and out of the prison system and others are still being transferred in crowded vans between facilities, sometimes across state lines. All increasing the chances the virus will spread.

With little information coming from within correctional facilities or from the outside world, those inside often try to figure out who’s been infected on their own.

Sometimes they learn about it from jail staff members, who have weighed orders to remain silent with their own concerns about the health of inmates and staff, the men say. Others make assumptions after vague memos about COVID-19 infections are posted in their units and a guard, cook or someone in their unit suddenly disappears after showing flu-like symptoms.

“It’s like we are expendable,” said Nascimento Blair, incarcerated at Fishkill Correctional Facility in upstate New York, where one staff infection was officially confirmed and prisoners have been informed about three others. “The last thing you want is to be around someone and not know that that person has it, because that’s a potential catastrophe.”

He said one officer had returned from a cruise vacation and was coughing and showing other flu-like symptoms in common areas. That person was eventually sent home, but only after a few days.

“Now we don’t even know if we’ve been exposed,” he said. “And how do you run from this?”

However, protocols on paper for dealing with infectious diseases behind bars do not always translate into reality. Even the simplest guidelines like hand washing and social distancing are often impossible to follow inside. Some men also reported shortages of soap and toilet paper.

So far, most of the confirmed cases in prisons and jails across America have been correctional officers, staff and civilian employees. Sometimes, incarcerated men known to have come into contact with infected people are sent to segregation or to their cells — whether they have a bunk mate or not.

But more often, it’s just business as usual. Several men told the AP they are trying their best to take care of themselves, washing their hands as much as possible and wiping down surfaces. Without masks, some people improvise by covering the receiver of communal phones with a sock or wearing gloves used for sports to try to keep from picking up germs.

Elijah Prioleau, who is locked up at Waupun Correctional Institution in Wisconsin on a three-year revocation after serving 16 years in the state’s prisons, said sick people are not being tested.

Instead, he said they are sent to another part of the jail, even though there are still healthy prisoners housed there. If someone who is sick refuses to be moved out of fear that they may infect others there, he said the only alternative is segregation, or solitary confinement — a place no one wants to go.

“As far as the quarantine goes, it’s a joke,” Prioleau said on a call with the nonprofit Forum For Understanding Prisons posted on Facebook Live. “They putting you in seg. They’re throwing you in the hole and quarantining you if you refuse to go over there.”

He added that the men are also not being given enough cleaning supplies, and that guards and prisoners do not have any protective gear so some are forced to improvise.

“I got on handball gloves right now holding the phone,” Prioleau said, adding many men were coughing and sneezing in his tier.

Visits from friends, relatives and, in most cases, lawyers have all but stopped, making it harder to get information in and out. Though some prisoners have access to phones, and at times now a few free calls, many say they are more isolated than ever.

“Guys are just idle, waiting for the next shoe to drop,” said Rickey Fu-Quan McGee, 42, who’s serving a life sentence at MCI-Norfolk, a prison in Massachusetts.

With so many men suffering from mental health issues, he said he’s concerned about their well-being. “No one’s coming around asking guys how they’re dealing with it. … This can be a very volatile environment, but you have a lot of seasoned guys walking around checking on everyone, making sure everyone’s good.”

In states, such as Minnesota, with no confirmed cases inside prisons, everyone is nervous and doing their best to protect themselves.

“The same rules that apply out there should apply here,” said Antonio Williams, who is serving time at the state’s Rush City Correctional Facility, about an hour north of the Minneapolis-St. Paul metro area.

He said he and others are paying careful attention to the guidelines issued in the outside world, even though they are all but impossible to follow inside.

“Meeting between 10 or more people should be restricted, right?” Williams said. “They force us to the chow hall. Literally elbow to elbow. If it comes here, it’s gonna spread like wildfire.”