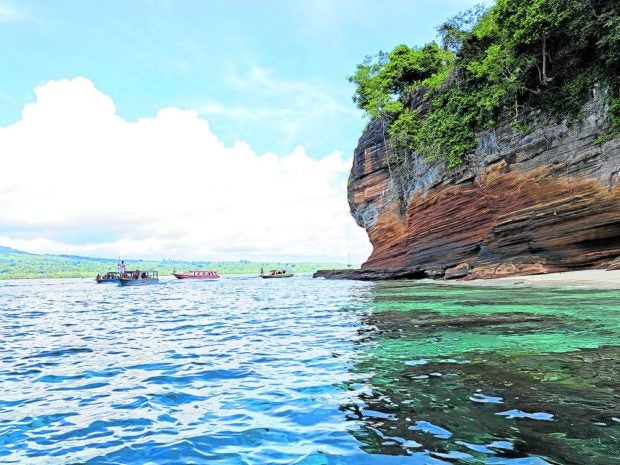 POTENTIAL TOURIST SPOT | The Tandang Mairan rock formation on Capual Island off the town of Omar, Sulu, has the potential of becoming a major tourist spot as the province, beset by years of conflict over the presence of the Abu Sayyaf bandits, has become “relatively peaceful” over the past five years. (Photo by BONG S. SARMIENTO / Inquirer Mindanao)

PATIKUL, Sulu, Philippines — With the marked improvement of the peace and order situation here, a ranking military official in Sulu has invited tourists to visit this island province even as he urged the remaining members of the Abu Sayyaf Group (ASG) to return to the fold of the law.

“Sulu is relatively peaceful. For quite a long time, there has been an absence of violent clashes [between our troops and the ASG] … Ang laki ng pinagbago ng (There is a marked change in the) peace and order ng Sulu [and the] last kidnapping was two years ago,” he told reporters.

Batara urged tourists to visit Sulu for them to feel the vibes, savor the culinary offerings, experience the distinct cultural heritage, and frolic on the white sand beaches of the place.

In the last five years, at least 400 ASG members in Sulu, a known stronghold of the terror group, had surrendered, tired of running away from the sustained military operations launched by the government, Batara said.

Many of those who surrendered were still in their communities but once the reformatory center, or halfway house, is completed, they will be brought there in batches for ideological reorientations and livelihood training to help them integrate into mainstream society.

He said one of the livelihood opportunities for former ASG members would be to become tourist guides, should the tourism industry thrive, considering the present relatively peaceful condition in Sulu, the official said.

Batara said that while the ASG had yet to be defeated and their leaders, Mundi Sawadjaan and Radulan Sahiron, were still being hunted, their forces in Sulu were no longer “that strong unlike in the last two years.”

Interior and Local Government Minister Naguib Sinarimbo of the Bangsamoro Autonomous Region in Muslim Mindanao (BARMM) led the groundbreaking ceremony for the reformatory center on Friday.

The center, set for completion in 10 months, will train former bandits to become productive members of mainstream society, Sinarimbo said.

“It is not sufficient that there is no war or conflict. There must be substantial changes in their lives that will give them a new hope for a brighter future,” he said.

Sinarimbo said the BARMM government also hoped to directly connect Sulu to the mainland Bangsamoro region like Tawi-Tawi province, which on Thursday received the first commercial flight from Cotabato City, where the BARMM seat of government is located.

“The maiden Cotabato-Tawi-Tawi flight [operated by Philippine Airlines] was a success and with the interest shown by the public, we’re optimistic that it can be sustained,” he said

Sinarimbo, also the Bangsamoro region spokesperson, said they also targeted to mount a direct Cotabato-Sulu flight, and eventually the Cotabato-Basilan route, to integrate the growth of the island provinces into the regional economy.