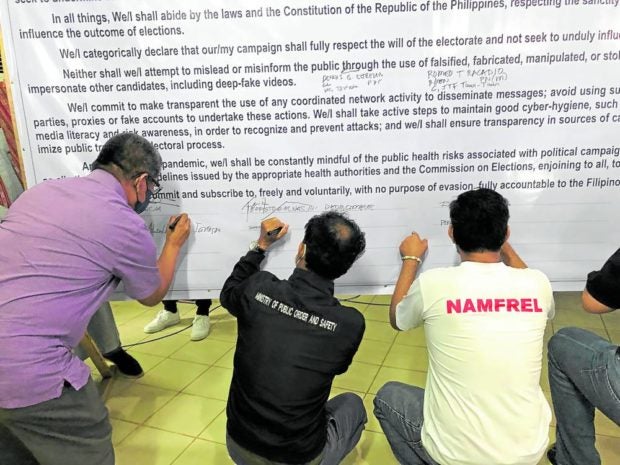 ISABELA CITY, Basilan, Philippines — Political aspirants in the provinces of Basilan, Sulu and Tawi-Tawi (Basulta) have decided to set aside their differences and signed a covenant to pledge for honest, orderly and peaceful elections on May 9.

Ray Sumalipao, the regional election director of the Bangsamoro Autonomous Region in Muslim Mindanao, considered the signing of the peace covenant by Basulta leaders held at Basilan State College here on April 23 as an “enormous historic event,” as the three provinces, especially Basilan, had been earlier identified as possible areas of concern in the upcoming elections.

“We were surprised and astonished by the presence of political candidates who, despite the short notice, attended the covenant signing,” Sumalipao said. “We are in the midst of the pandemic and we see the aspirants committing themselves to an honest election, allowing everyone to exercise their suffrage without coercion,” Sumalipao said.

Commission on Elections (Comelec) Chair Saidamen Pangarungan said they decided to hold an “integrity pledge” signing here because the three provinces proved to be a challenge for the Comelec in terms of securing peace in past elections.

Lt. Gen. Alfredo Rosario Jr., chief of the Western Mindanao Command, said he hoped that with the number of political bets who signed the pledge, the cycle of fear and violence in Basulta was finally broken.

Almost a hundred individuals, including those from civil society organizations, took part in the covenant signing, officials said.

“With this covenant, we will finally denounce the culture of violence and everyone is required to exercise maximum tolerance,” Rosario said.

Pangarungan was also hopeful that peace would reign in the Basulta area on election day.

Sumalipao explained they needed the presence of top military and police officials in the covenant signing to remind candidates that the PNP and the AFP, both under Comelec control during elections, are prepared to arrest and prosecute election law violators.

He admitted that private armed groups continued to exist in Basilan, the Lanao provinces and Maguindanao but “their numbers are few.”

“We will see to it that their firearms will not be used [to intimidate or hurt people] during the conduct of the elections,” he added.

A day before the signing of the integrity pledge, a religious leader in Basilan’s Sumisip town was shot dead while four of his companions were seriously wounded. But Brig. Gen. Domingo Gobway, commander of the Joint Task Force Basilan, quickly dismissed the April 22 killing of Imam Mutilan Ajanad as caused by “rido” (clan war) and not election-related.