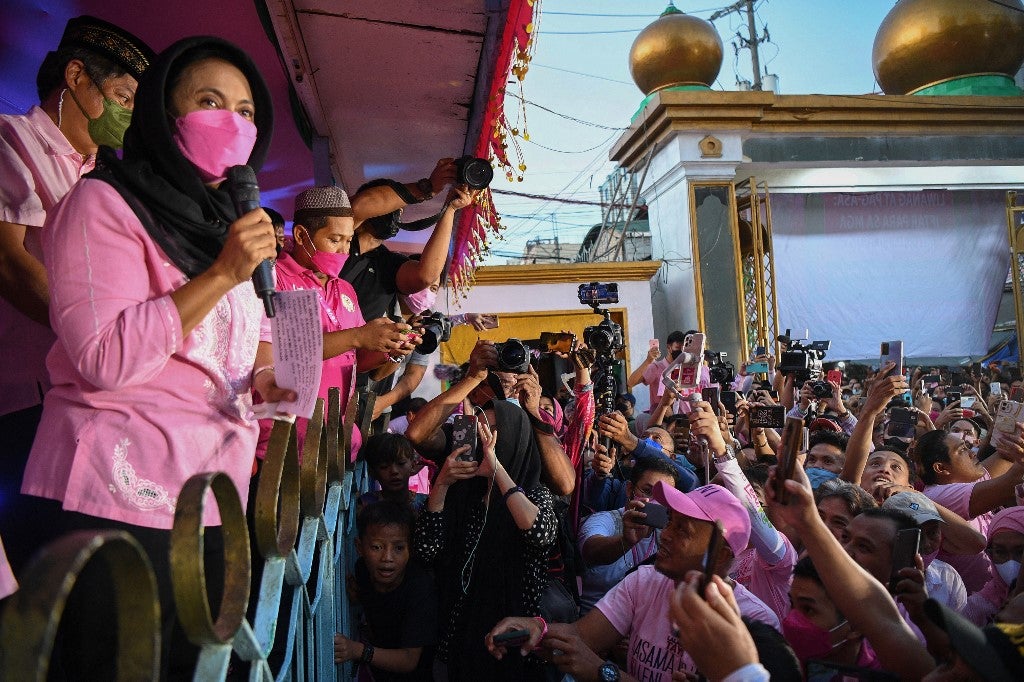 Philippines’ Vice-President and opposition presidential candidate Leni Robredo (C) wearing a hijab, speaks at the Golden mosque grounds in Manila on April 22, 2022, as she joins in the breaking of the fast with Muslim Filipinos. (Photo by Ted ALJIBE / AFP)

ISABELA CITY, Basilan — After keeping his silence on whom to support for president, Basilan Governor Jim Hataman Salliman came out to endorse Vice President Leni Robredo on Saturday.

“I was undecided for quite a long time, while the people close to my heart have been vocal in their support for Robredo. I was undecided because I need to be more discerning in choosing and endorsing a candidate that will lead our country,” Salliman told the INQUIRER, after his attendance to the BASULTA (Basilan-Sulu-TawiTawi) Peace Covenant led by the Commission on Elections in this city on Saturday, April 23.

In a statement, Salliman said: “I believe in Vice President Robredo’s vision, track record of governance. Her values aligned with mine, along with the rest of the United Bangsamoro Justice Party (UBJP), and every Moro (who) believes in dignity, justice and regional recovery and progress.”

Salliman pledged to give his all-out support to Robredo, “as she works to build a fairer, more compassionate and genuinely united Philippines.”

Salliman’s commitment of support came out alongside with the open declaration of the UBJP in Camp Darapanan on Saturday morning.

In a statement sent to the INQUIRER, the AKRHO fraternity in Caraga region stated that “the brotherhood organization of Mayor Isko Moreno, the Alpha Kappa Rho fraternity in Mindanao is switching our support to Vice President Leni Robredo.”

“We carefully reviewed the platforms and programs of presidential candidates and among the candidates, we realized and agreed that Robredo is the right person to lead the country,” Argaño added.

“This is our birthday gift to Robredo. We believe in her abilities, qualifications, character and records in public service,” Argaño said.