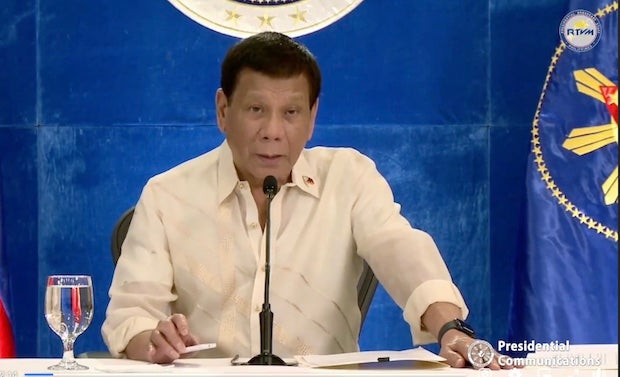 President Rodrigo Duterte in his taped weekly “Talk to the People” that aired on Monday, June 6, 2022. (Photo from an RTVM video posted on Facebook)

MANILA, Philippines — Even with the end of his term on June 30, President Rodrigo Duterte is bent on continuing the crackdown on illegal drugs.

Duterte on Sunday warned those who will continue with their illegal drug activities that he will kill them.

“Ngayon, ‘yung gustong pumasok, I’m warning you. Buhay-buhay lang tayo. Either you kill me or I will kill you. Simple as that. Hindi ko papayagan. And even as an ex or former president, hindi ko payagan iyang society, iyong mga anak natin sisirain mo. P***** i**, papatayin talaga kita, wala akong pakialam sa iyo,” he added.

Duterte further shared that there is a judge in Manila who is handling 1,000 drug cases with no convictions or filed charges yet.

(Here in Manila, I’ll tell the Supreme Court there is this judge with 1,000 cases, but no convictions or filed charges yet. None. Either you remove them or be frank with them. I don’t care if you are a general, a judge, or a congressman if you are in the drug trade.)

The President was investigated by the International Criminal Court for alleged crimes against humanity committed in line with the war on drugs.