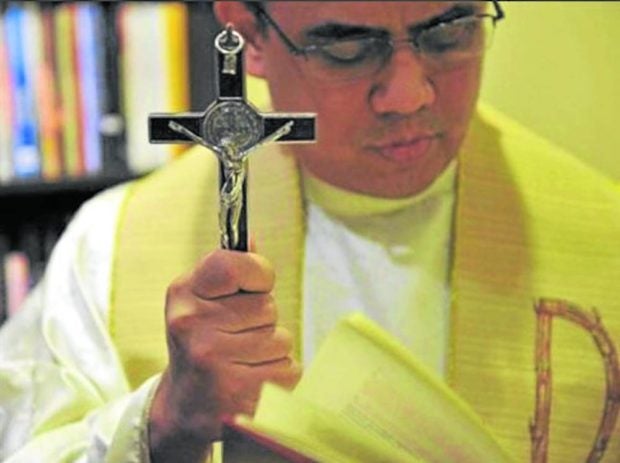 MANILA, Philippines — The way Fr. Jose Francisco Syquia describes his work as the chief exorcist of the Archdiocese of Manila, one could imagine him as a Latin-speaking leader of an elite antiterror squad taking down the world’s top terrorist, Satan, who could strike anyone, anytime, anywhere.

He said Satan, like a terrorist, would rather have people dismissing him and not believing that he exists. That way, Syquia explains, people will be less mindful about committing evil deeds.

“Think of him as a terrorist who does not want a country to know when he will attack. He wants to remain hidden so people cannot prepare when he does his worst,” warned the exorcist who is fondly called Father Jocis.

The devil’s diabolical attack could come in the form of demonic possession, which average about 10 suspected cases referred daily to the 55-year-old priest.

All the cases that come in are observed carefully by a team composed of priests trained to detect demonic phenomena, counselors, psychiatrists, psychologists, case officers, and lay volunteers.

After a meticulous study of each case, he and his team are able to determine who are possessed by “something diabolical,” separating them from those who are grappling with psychological or physiological issues.

The “real” possessions comprise about 85 percent of the suspected cases.

But what is worrisome is that the pandemic is causing a rise in the number of cases, Syquia said in an interview with the Inquirer.

“Because of the lockdown, so many people are creating openings to which the diabolical can enter their lives. People engaging in the virtual world, social media, pornography — so many doorways,” he said.

According to Syquia, possession usually takes hold when a person faces a crisis, whether it is spiritual, emotional or relational within the family. Children spending so much time on the internet by themselves are also vulnerable to attacks, he said.

Syquia said that one case close to home, in a manner of speaking, was a sickly seminarian who was fond of anime characters.

After making pacts with the devil, the young man got healed and was able to draw anime characters with two hands simultaneously, he said.

“The seminarian said he had difficulty sensing the presence of God. He told himself that the devil is better because he can sense the devil more than God,” the priest said.

But there was payback. The seminarian would wake up in the morning and find himself in the refectory or dining hall with no recollection of how he got there. Later, he could no longer control himself and tried to stab a priest.

Eventually, the young man drew his own blood and used it to illustrate a pentagram, the supposed devil’s symbol, before he could sit inside the seminary chapel.

A more recent case was a psychiatrist who used “psychic powers” to treat her patients. The woman would wake up with bruises and wounds, and would hear voices.

“She had a difficult relationship with God and a bad attitude. She was always angry,” Syquia said.

With “pray overs,” the seminarian and the psychiatrist were rid of the devil, he said.

“If deep in his heart, a person desires God and develops a strong faith, that helps a lot in expelling the spirits,” Syquia said. That was how the seminarian and psychiatrist were healed, he said.

Syquia and his team perform diagnostic exorcisms in the Latin language and emergency exorcisms for “walk-in cases” of victims with visible signs of possession.

Possession is the worst and most serious where the devil or several evil spirits take over a person’s body and cause it to do humanly impossible things, like levitating, and the possessed person would have no recollection of the things he did, he said.

Demonic oppression is another form of attack, albeit considered milder.

In this case, a person’s five senses are assaulted to cause feelings of terror. The person can hear voices, smell foul odors, suffer pains and bruises and even sexual abuse.

In one presentation at the Vatican of records from the Archdiocese of Manila Office of Exorcism, Syquia said demonic oppression comprised 55 percent of the cases. That was followed by hauntings of homes and other places (21 percent), possession (15 percent), and those involving demonic or seriously harmful thoughts like blasphemy, murder and suicide (9 percent).

In response to the growing number of these cases, the Archdiocese of Manila decided to establish the St. Michael Center for Spiritual Liberation and Exorcism, with encouragement from former Manila Archbishop Cardinal Luis Tagle, who is now the Vatican’s Prefect of the Congregation for the Evangelization of Peoples.

Syquia and the Archbishop of Manila Cardinal Jose F. Advincula led the groundbreaking ceremony on May 17.

The planned three-story center where all exorcism rites of the archdiocese will take place will rise on the grounds of Our Lady of Guadalupe Minor Seminary in Makati City.

A statue of St. Michael the Archangel, who Catholics believe will battle Satan on the last day, will stand on top of the building.

The center will also host local and foreign priests who will be trained by Syquia and other members of the 200-strong Philippine Association of Catholic Exorcists.

The center will provide privacy and a “sacred atmosphere” and serve as a permanent repository of the records of the exorcism office, Syquia said.

Syquia said possessed persons usually would not believe stories by witnesses until they see the video recordings of themselves spewing vomit, throwing violent fits and speaking in strange voices.

“The Catholic Church will not create the ministry of exorcism if there is no need. During the time of Christ, he exorcised thousands of possessed people,” he said. “There was a vacuum created when the ministry was forgotten, with some saying these things are already passé.”

‘Demonic texts’: The enemy can use technology, says exorcist

Exorcist: ‘We can’t see evil, only its effects’