‘Demonic texts’: The enemy can use technology, says exorcist

MANILA, Philippines — Demonic spirits can send text messages to cell phones and use modern technology to harass or lure people to the dark side.

“We did not expect [demons] could do so but if you ask other exorcists, they would tell you the same experience. Usually [the demons would swear at you] or say, ‘This person will never get away from us,’” he says in an interview.

Syquia, president of the 170-strong Philippine Association of Catholic Exorcists (PACE), has been performing exorcisms since 2002.

His most memorable encounter with demonic texts happened in 2003 when the office cell phone used by the Archdiocese of Manila Office of Exorcism (AMOE) received menacing messages from the phone of a female ex-satanist referred to him by a Cavite-based priest. The priest earlier reported seeing the woman levitate.

As “Gina,” Syquia’s secretary and AMOE coordinator, remembers it, the priest was in his office speaking with the possessed woman and her companion when the companion’s phone began receiving messages from the possessed’s phone that was in another room, near Gina’s desk.

The messages were all in Filipino. “Don’t believe Father,” one read. Another claimed that Syquia was a sinner and a liar, and that he wouldn’t be able to help the woman at all.

Gina says she herself received a call from the possessed woman after the latter left their office. During their conversation, her phone was also getting messages saying it’s not true that God loves her and she’d fail in helping Syquia perform the exorcism.

“I erased the messages right away after our conversation. We don’t keep records of them. We believe it is not okay to keep them,” Gina says. 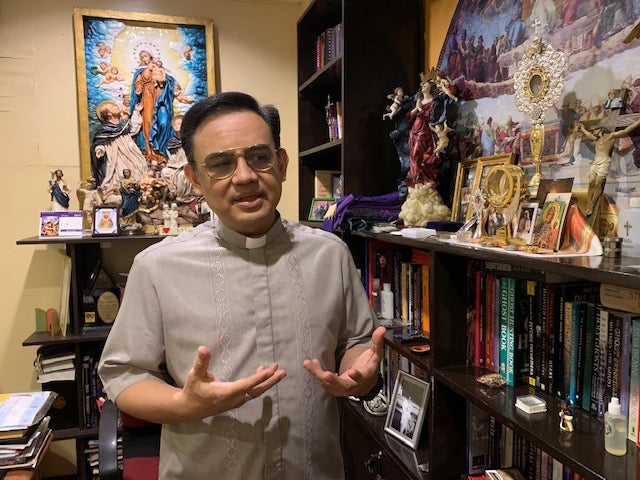 Syquia recalls that the messages brimmed with anger and curses. The possessed woman who consulted him did not speak English, but he received “f*ck you” messages from her number.

“The devil has power over anything electrical,” Syquia says. “If this place is infested, for example, and they want their presence known, usually the lights would flicker. If I give a talk and use a certain gadget, the devil would easily shut it down because he is an expert in anything electrical.”

But more than threatening messages, Syquia is worried about how the devil uses modern technology to lure young people through the internet, especially during this lockdown when they spend unsupervised hours in cyberspace.

He cites a study done in 2000 that found children age 10-17 having only one-third of face-to-face encounters with other people compared to similar age groups from past generations.

“When a person gets isolated, the devil starts to work on the mind,” he warns. “The young start to have all these thoughts that make them feel depressed and alone. Only 30-percent human contact? That’s what the devil desires.”

According to Syquia, spending much time surfing the web can put a young mind in a hypnotic trance and become open to diabolical influences and auto-suggestion.

“The internet has no morality and a child would tend to search for what titillates his senses. So he jumps from one [medium] to another, trying to sustain a high similar to a dopamine hit,” says the priest.

He adds: The devil attacks individuals in varying degrees. Temptations that one encounters daily are considered ordinary attacks.

“Extraordinary” attacks that may require help from a priest include demonic oppression and obsession where a person’s five senses are assaulted through frightening apparitions; suicidal and blasphemous voices; bruises, pains and sexual harassment; foul odors; or loss of appetite.

In more serious cases, Syquia says, the devil toys with a person’s emotions and causes intense depression, anger and fear. The person will eventually experience spiritual “dryness” and desolation, and become too lazy to pray, let alone hear Mass.

A person’s imagination may also be assaulted with demonic, sexual and blasphemous images. Memory can be used by causing “obsessive remembrances of past hurts,” Syquia says.

Worse attacks, he says, can lead to unexplained sicknesses or tumors as well as freak accidents. Sleep may be disturbed by night terrors and sexual attacks by an incubus (male spirit) or succubus (female spirit). Eventually, relationships in the home and at work may suffer, further isolating a person from others. Businesses may falter and fail.

The most serious form of demonic attack is possession, where the devil or several evil spirits take over a person’s body and cause it to do humanly impossible things that the person will not remember once the crisis state is over.

In a talk on exorcism at the Vatican, Syquia presented AMOE records showing that in the Philippines, demonic oppression comprises most of the cases (55 percent) followed by cases of infestation or haunting of places and homes (21 percent). Possession cases are at 15 percent, and those involving demonic obsessions or thoughts at 9 percent. 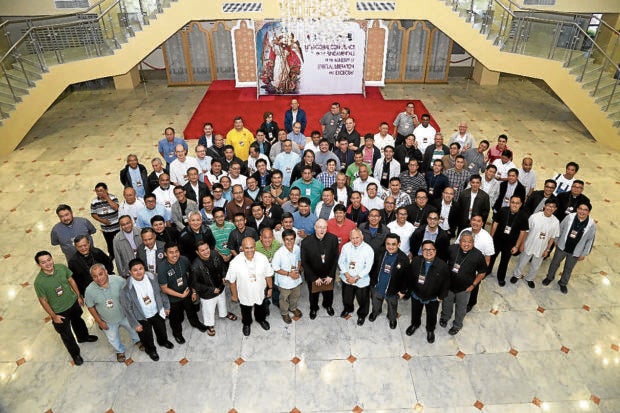 FROM ONLY TWO IN 2002 Now with 170 members , the Philippine Association of Catholic Exorcists (PACE) includes priests from 52 dioceses all over the country. It is directly under the Catholic Bishops’ Conference of the Philippines and is affiliated with the Vatican-approved International Association of Exorcists. —JOSE FRANCISCO SYQUIA/CONTRIBUTOR

Syquia says the Vatican has alerted Catholic exorcists to occult websites that put a curse on anyone who opens them. This means a person in a hypnotic trance will easily appropriate the images and messages in the website.

Ranking Church officials in Rome have warned that the Book of Revelation, the last chapter in the New Testament, refers to a “second beast” that will emerge from the red dragon commonly known as Satan, according to Syquia.

“[They] said this second beast is actually the virtual world that the devil Satan is creating,” he says. “While we have the real world, the red dragon that is the devil would have two beasts come from him. One of these will have powers to create a virtual world that is different from the world of God. It has its own rules, and once people start to live there more than in the real world, it will be an escape from the struggle to become holy in this world.”

Worse, aggression and despair may develop in an isolated person already addicted to the web. Once these thoughts become overwhelming and a crisis hits, the person may become suicidal, Syquia says, adding:

“He cannot, in a sense, become ready for life because in the internet, there is no such thing as suffering. The person is not taught how to bear the Cross.”

Syquia himself became a target of demonic harassment before he entered the seminary. He was an undergraduate with plans for the priesthood when the New Age movement piqued his curiosity and led to his exploration of esoterica. 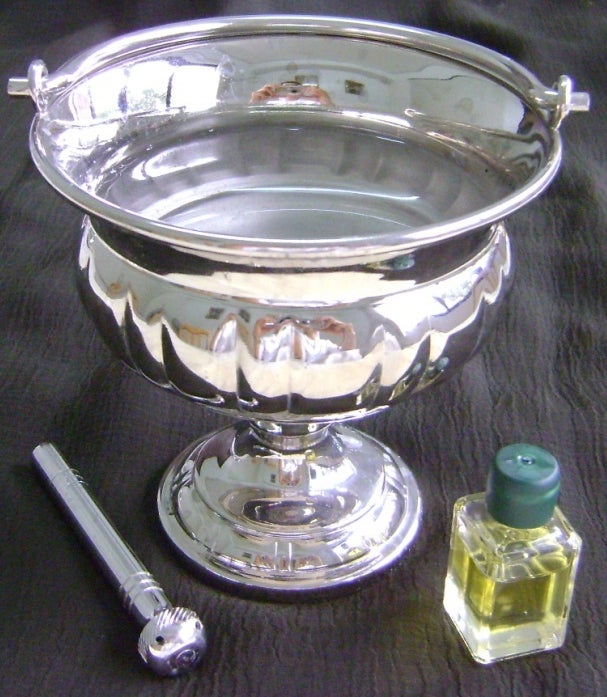 TOOLS OF THE TRADE Holy water and holy oil

As a result, he says, his “third eye” was opened, and he began experiencing demonic attacks.

He eventually turned back to the Catholic faith and to his plan of becoming a priest.

It was in 2002 when Syquia began the exorcism ministry, armed with a book on the subject written by Fr. Gabriel Amorth, chief exorcist of the Vatican at that time, and a second book on deliverance by an ex-priest whose name he cannot remember.

His peers in the Archdiocese of Manila were skeptical, and wondered: “Why do we need that?”

And then the cases started coming in. “Many Catholics were going to [faith healers and spiritists]. So when people heard that the Church has this [ministry], boom! [Many came to us],” Syquia recalls. 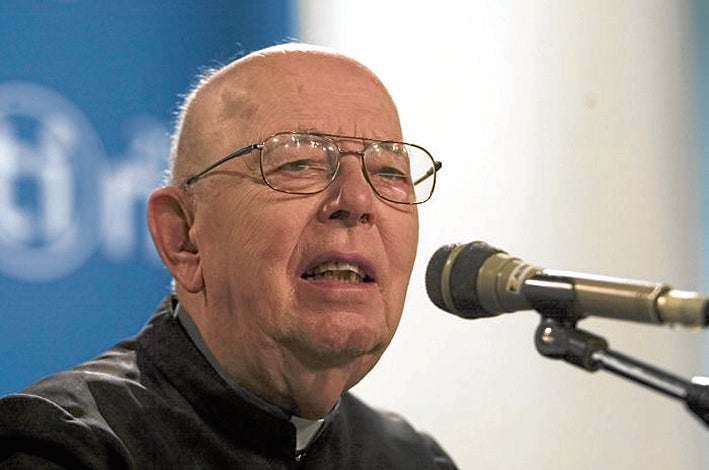 In 2006, Cardinal Gaudencio Rosales formally created the AMOE with Syquia and a second priest as exorcists. With them were one deliverance minister, a nun, a coordinator, a Catholic doctor, a lawyer and two lay volunteers. It was also at this time that Syquia published his first book, “Exorcism: Encounters with the Paranormal and the Occult.”

Two years later, AMOE had four exorcists and Syquia was training priests from other dioceses.

The team has grown to include a clinical psychologist, a psychometrician, two counselors and several lay volunteers, along with case officers who interview referrals to AMOE and help Syquia determine cases of possession.

In 2015, Syquia gathered 12 more exorcists from provincial dioceses and began streamlining the group. PACE was established in March 2017, initially with 117 members from 52 dioceses.

PACE is directly under the Catholic Bishops’ Conference of the Philippines and is affiliated with the Vatican-approved International Association of Exorcists.

Then Bishop Luis “Chito” Tagle of Imus, Cavite, was among those who regularly referred cases to Syquia and was diligent in seeking follow-up reports. In 2019, Tagle, by then a cardinal, appointed more exorcists to boost AMOE.

The groups train priests, exorcists and lay teams in Malaysia, Singapore and Indonesia. As chief exorcist of AMOE, Syquia has also been invited to give talks in Rome and at the Pope Leo Institute in Chicago.

The exorcists’ current project is the construction of the St. Michael Center of Spiritual Liberation and Exorcism in Manila.

Syquia has lost count of the exorcisms he has performed in the past 18 years. But each experience strengthens his belief that God and the devil both exist.

“I have seen God work in a very tangible way, how God acts and how present He really is,” Syquia says. “During an exorcism, you see a person levitate, see him vomiting mud—that’s not psychological. You see the reality of the diabolical. The exorcist commands, ‘In the name of Jesus!’ And the demons react, you see their fear of God, especially when they are expelled and the person is liberated.”

One time, the priest says, he prayed to Satan’s nemesis during an exorcism and immediately, the demons possessing the person shouted, “St. Michael the Archangel is here!”

Any exorcist asked about his experience will say that liberating persons from the devil is one of the most concrete proofs of the fight between good and evil, Syquia says.

He adds: “The devil knows the infinite value of every soul in the eyes of God. And if the exorcist does not save the person’s soul, he could end up like those demons — human souls but with a diabolical spirit of hatred and despair that would last forever.”

Priests vs demons: How you become open to ‘attacks’