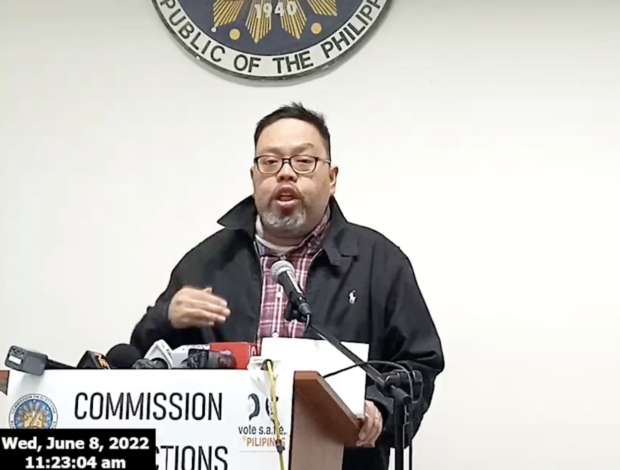 Director James Jimenez, chief of the Comelec Education and Information Department, speaks during the deletion of the 2022 ballot face database from the NPO’s servers. Screengrab from Comelec / Facebook

MANILA, Philippines — The Commission on Elections (Comelec) on Wednesday marked the end of the 2022 national and local polls by removing the ballot face database from the servers of the National Printing Office (NPO).

The deletion was held at the NPO on Wednesday in the presence of political parties, citizens’ arm groups, members of the media, and other stakeholders.

“Now, we’re at the penultimate stage of our operations here at the NPO,” Director James Jimenez, chief of the Comelec Education and Information Department, said during the program. “From here, we need to pull out of the NPO because tapos na po ‘yong trabaho ng Comelec dito. And in order to do that, one of the last things we need is to remove Comelec data from the NPO servers.”

Jimenez explained that this was done so the NPO can redirect their machines to service other projects.

However, the erstwhile Comelec spokesperson gave assurance that the Comelec will keep backup copies of the ballot face database.

Last May, the commission also shut down the automated election system servers and network infrastructure used for the recently concluded polls.

After disputing claims that the 2022 elections were “marred by a higher level of failure of the electronic voting system than ever before,” the Comelec maintained that no cheating was done in the May 9 polls.

The military and police likewise said the elections were “good” and “generally peaceful” despite reports of poll-related violence, shootings, and explosions among others.