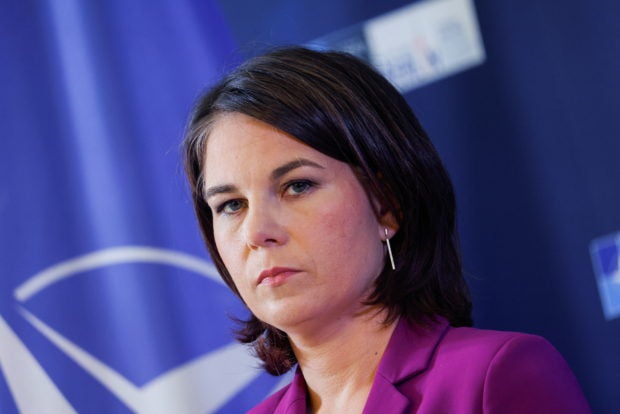 FILE PHOTO: German Foreign Minister Annalena Baerbock, looks on during a news conference at a NATO meeting in Berlin, Germany May 15, 2022. REUTERS/Michele Tantussi

ISLAMABAD — Germany will not recognize the Taliban as the legitimate rulers of Afghanistan as long as “dire” conditions under the Islamists persist, Germany’s foreign minister said on Tuesday, calling for a united international call on the Taliban for change.

No foreign government has formally recognized the Taliban since they took over Afghanistan last August as U.S.-backed foreign forces withdrew after two decades of war.

“When we look across the border the situation is dire,” the German minister, Annalena Baerbock, told a news conference in the Islamabad, capital of neighboring Pakistan.

She warned of a looming humanitarian and economic crisis in a country in which she said girls were deprived of education, women were excluded from public life and dissenting voices were suppressed.

“As long as they go down this path, there’s no room for normalization and even less for less for recognition of the Taliban as the legitimate rulers of the country, at the same time we will not … abandon the people of Afghanistan,” she said, adding that Germany would send humanitarian aid.

Taliban officials deny accusations of rights abuses and say they are working on creating conditions in which they will open highschools for girls.

Pakistan, which for years saw the Taliban as an effective block on the influence of old rival India in Afghanistan, has called for engagement with the Taliban, saying the world cannot afford a humanitarian crisis.

“It is our hope that Afghan authorities would be responsive to the international community’s expectations regarding inclusivity respect for human rights of all Afghans including women and effective actions against terrorism,” he said.

Baerbock called for a unity to press the Taliban.

“The international community must stand united and together tell the Taliban loud and clear – you are heading in the wrong direction,” she said.

Baerbock also said Germany and Pakistan had streamlined a system for bringing Afghan refugees to Germany via Pakistan and more than 14,000 Afghans who were particularly at risk had been able to travel to Germany over recent months.

Broadcaster ntv later reported that Baerbock was cutting her visit to Pakistan short after testing positive for the coronavirus. Her ministry confirmed the report.