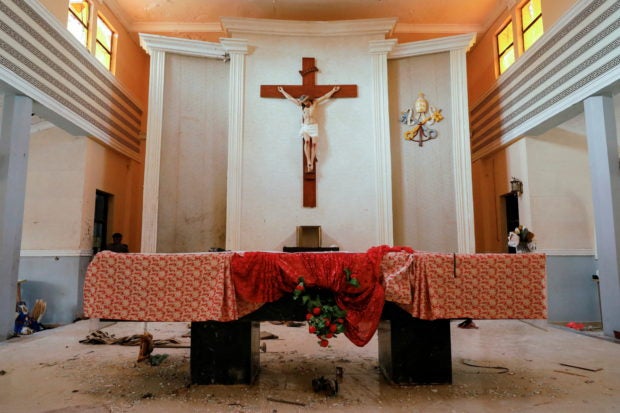 A view of St. Francis Catholic Church where worshippers were attacked by gunmen during Sunday mass service, is pictured in Owo, Ondo, Nigeria June 6, 2022. (REUTERS/Temilade Adelaja)

OWO, Nigeria — Sunday’s attack on a Catholic Church in the Nigerian town of Owo killed 22 people and injured 50, an official said on Tuesday, as the local hospital started to run short of supplies needed to treat survivors.

Unknown assailants attacked the congregation at St. Francis Catholic Church with guns and explosives during a mass to celebrate the Christian holiday of Pentecost, leaving a scene of carnage behind them as they escaped.

Authorities have given no information about the identity or motive of the attackers.

Media reports initially said more than 50 people were killed. Authorities had released no casualty figures until an official from the National Emergency Management Agency spoke on Tuesday.

Inside the church, streaks of blood on the floors and walls, broken furniture, shards of glass, plaster debris, and abandoned personal items testified to the violence of the attack.

At the town hospital, some survivors and their relatives said they were having to source bandages and other supplies from private pharmacies as the hospital was running out – a common problem in underfunded Nigerian public hospitals.

“The crutches, we bought them from outside, they don’t have them here,” said Benjamin Asogwa, who suffered a knee injury during the attack.

A group of employees of the national power company pooled resources to buy bandages, disposable syringes and gloves, as well as cans of soft drinks, to deliver to the hospital.

“We brought some little refreshment for the medical team,” said Michael Barnabas, one of the donors.

Police said on Monday they had recovered unexploded bombs as well as casings from bullets used in AK-47 assault rifles.

They said some of the attackers had positioned themselves among the worshippers, while others fired into the church from different directions.

Pope Francis and Nigerian President Muhammadu Buhari were among those who expressed horror at the attack. On Tuesday, West African regional bloc ECOWAS condemned it and pledged to work with Nigeria against “the evils of terrorism”.

Owo is located in Ondo State in southwestern Nigeria, a region not usually prone to religious violence. The southwest is home to the Yoruba ethnic group, which is split roughly equally between Christians and Muslims who coexist peacefully.

Nigeria has been struggling for more than a decade to suppress Islamist insurgencies in the northeast that have killed hundreds of thousands and displaced millions, but the insurgent groups are not known to be active in Ondo.

Some Owo residents and one Catholic bishop have suggested that the attack may be linked to conflict between nomadic ethnic Fulani herdsmen and local farmers over land use. The authorities have said nothing about that and no evidence has come to light.