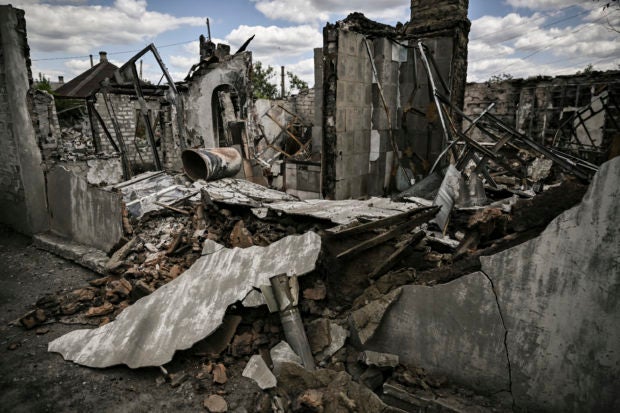 This photograph shows a rocket nailed in front of a destroyed house in the city of Lysychansk in the eastern Ukrainian region of Donbas on June 7, 2022. (Photo by ARIS MESSINIS / AFP)

Kyiv, Ukraine — Ukraine on Tuesday accused Russian forces of detaining some 600 people, mainly journalists and pro-Kyiv elements in the southern region of Kherson, which Moscow’s military now holds in its grip.

“According to our information, some 600 people are … being held in specially converted basements in the region of Kherson,” said Tamila Tacheva, the Ukraine presidency’s permanent representative in the Crimea, the peninsula to the south of Kherson which Moscow annexed in 2014.

Tacheva said the bulk of those being held were “journalists and militants” who organized “pro-Ukrainian gatherings” in Kherson (city) and the region around it after it was occupied by Russian forces in the wake of the invasion launched in late February.

“According to our information, they are being held in inhuman conditions and are victims of torture,” Tacheva added without giving further details.

Some Ukrainians held in the Kherson region – civilians but also detained combatants – have been sent to jails in Crimea, she added.

Straddling the Black Sea and the Sea of Azov, the Kherson region was home to around a million people before the invasion. However, thousands have fled the key port on the Dnipro River since the Russians targeted the city, which became the first major urban center to fall in the first week of March.