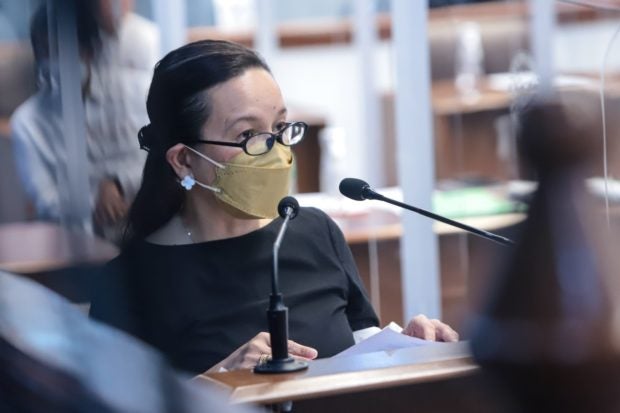 Sen. Grace Poe, chairperson of the Committee on Public Services, presented on June 1, 2022, the bicameral report which she said had many conflicting provisions but were reconciled due to the perseverance of both the Senate and the House of Representatives conferees. Senate PRIB file photo / Bibo Nueva España

MANILA, Philippines — The executive branch should immediately “alleviate the pain” of the country’s public utility drivers and operators amid “months of sluggish response” that have pushed the transportation sector “to the edge,” Senator Grace Poe said Tuesday.

Poe, who chairs the Senate public service committee, issued an urgent call to the Department of the Interior and Local Government (DILG) to submit their respective lists of fuel subsidy recipients and for the Land Transportation Franchising and Regulatory Board (LTFRB) to vet them.

“Months of sluggish response from concerned government agencies have pushed our transportation sector to the edge,” she said in a statement.

“A number of public utility vehicle (PUV) drivers and operators are set to stage a widescale transportation strike should the problem on the rising prices of petroleum products not be sufficiently addressed,” she added.

“[W]hile the legislature is on a break, the executive department must alleviate the pain of our PUV drivers and operators. Gobyerno lamang ang maaaring sandalan ng ating mga tsuper sa pagharap nila sa krisis na ito [Our drivers can only count on the government in facing this crisis],” she also said.

Poe noted that the LTFRB has so far managed to disburse fuel subsidies to around 250,000 out of 264,000 recipients.

“Almost half of the year has gone by without sufficient relief. Umaasa tayo ng mas maagap na tugon mula sa pamahalaan [We are hoping for a more proactive response from the government],” she stressed.

She pointed out that senators “fought for a critical” P2.5-billion fuel subsidy provision for PUVs in this year’s budget.

“That such amount has not been fully disbursed while our country deals with a crisis of epic proportions is beyond comprehension,” Poe added.

The senator also renewed her call to the executive department, particularly to the Department of Finance, to suspend the excise tax on fuel and petroleum products until the  global market “normalizes again.”

She said she has pushed for this in the past and “will do so again in the future if necessary.”

“While it is true that failure to meet our revenue targets may have adverse effects on our country, so could a transportation strike which can paralyze operations in key areas and cost us much more,” she added.

On Monday, Malacañang appealed to public utility jeepney drivers and operators to postpone their strike this week.

Acting presidential spokesman Martin Andanar assured that the government is doing its best to help them in light of skyrocketing prices of fuel.