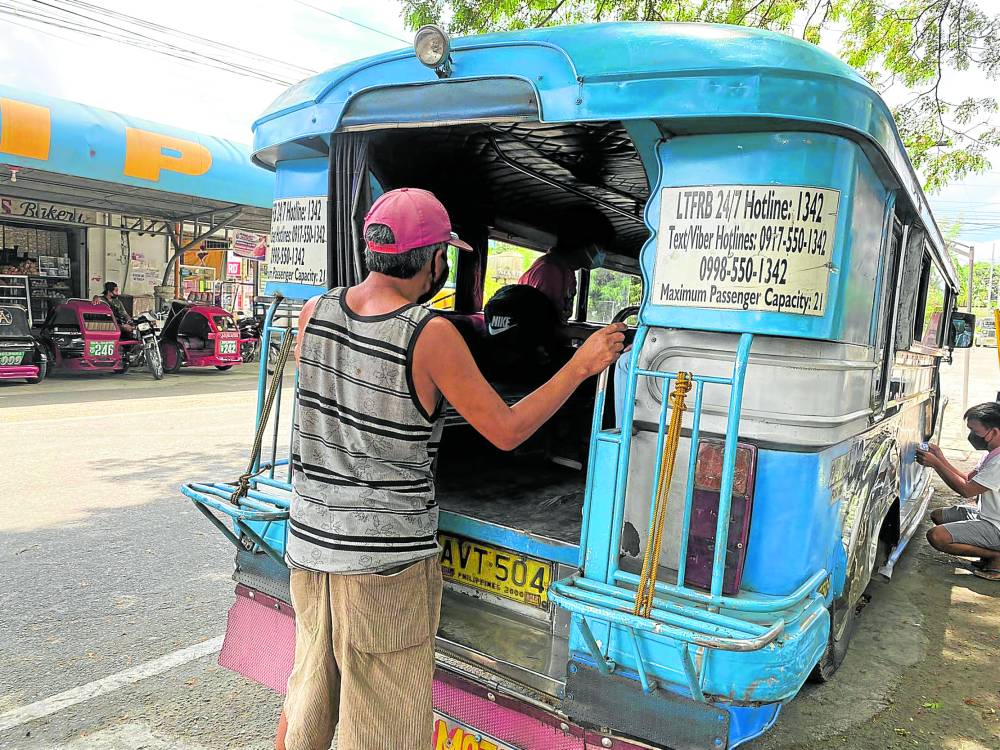 A jeepney driver waits for passengers heading to Laoag City in this photo taken Wednesday, March 16. Aside from the rising fuel prices, jeepney drivers and operators in the town are still reeling from lack of passengers despite eased COVID-19 protocols under alert level 1. | PHOTO: Ron Chester Corpuz/Contributor

BALANGA CITY, Bataan, Philippines — Jeepney drivers in Luzon provinces are struggling to bring home enough money for their families after a day on the road due to rising fuel prices, forcing them to take on odd jobs and find other ways to cope with the crisis.

Cris Mira, chair of the transport group Kaisahan ng mga Sasakyang Namamasada sa Bataan (Kasakbayan), said many jeepney drivers were feeling the crunch as they found it hard to pay their operators under the traditional boundary (daily lease) scheme.

“They (drivers) would be lucky if they could pay a boundary of P300. Their supposed take-home income is spent on fuel,” Mira told the Inquirer in an interview on Tuesday.

He said many of his group’s members had been forced to find temporary jobs in construction sites.

Mira said the national government should immediately address the plight of jeepney and bus drivers by providing fuel subsidies or increasing the fare to avoid a mass transport strike.

Efren Montes, Kasakbayan secretary-general, said some jeepney operators were also forced to shoulder the fuel expenses to help their drivers.

“Most of the time, it’s the operators who had to pay for the diesel because of the recent price hikes. They have to do this so their drivers can still earn and put food on the table,” Montes said.

The divers’ problems are worsened by what they described as “excessive” terminal fees and other monthly charges being collected by a private transportation terminal for jeepneys, minibuses, and tricycles.

Local governments, the drivers said, should help them by building public terminals.

In Ilocos Norte province, a group of jeepney drivers has implemented an alternate schedule to allow each of them to go on a trip at least once every three days due to lack of passengers.

“We divided the 87 drivers into three groups so that all of them will have the chance to earn for their families,” said Gilson Castueras, president of Solsona Lines Transport Corp.

Since the pandemic was declared in 2020, the group has not seen a fare hike, except for the additional P15 to P20 that was allowed by the Land Transportation Franchising and Regulatory Board last year.

But since the government had already allowed jeepneys to operate at a higher capacity in areas under alert level 1, the fare rate was back to P46.50 per trip, Castueras said.

“We also decided to limit the number of passengers per jeepney to at least 16 people so that nobody goes home empty-handed,” he said.

Castueras said some drivers have also started accepting other odd jobs when they are off-duty.

“Some of them are helping in family-owned farms, while others have found jobs in poultry farms,” he said.

Castueras added: “We are just thankful that the commuting public understands our plight right now, as some of them would voluntarily add their regular fares to help us. Some would no longer get their change.”

He said they were also waiting for assistance from the provincial government, which promised to give them aid to ease their woes.

In Pampanga province, transport group Samahan ng mga Tsuper at Operator Tutol sa Phase Out (Stop), said it would join the nationwide strike should the national government fail to heed their appeal to suspend the collection of excise on petroleum products amid rising prices.

He said the recent big oil price increase led drivers to “break even,” or just enough to cover most of their operation costs.

Yumul did not say how many drivers would stop plying their routes in the province, including Angeles City and Clark Freeport, or how many hours or days the protests would last.

He said there was “uncertainty and alarm” because aside from the increasing prices of supplies and gasoline, there was a call for a pay hike.

“Most of us in the business sector have suffered from the pandemic for two years. Now that we are starting to build up recovery actions, the war between Russia and Ukraine poses yet another tragedy to the business sector,” Romero said.

Drivers, fishers could only groan as subsidy trickles down