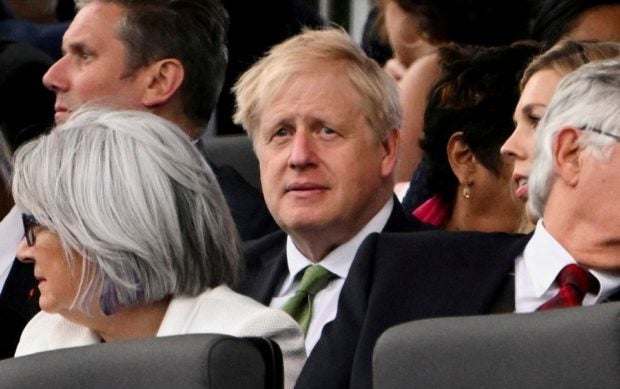 LONDON — Prime Minister Boris Johnson could face a vote of confidence as soon as Monday, ITV’s UK editor reported, citing “rebels” in the governing Conservative Party, after the British leader was booed at Platinum Jubilee events at the weekend.

Johnson, appointed prime minister in 2019, has been under growing pressure, unable to move on from a damaging report over parties held in his Downing Street office and residence when Britain was under strict COVID-19 lockdowns.

Dozens of Conservative lawmakers have voiced concern over whether Johnson, 57, has lost his authority to govern Britain, which is facing the risk of recession, rising fuel and food prices and travel chaos in the capital London because of strike action.

Several have already said they have requested a confidence vote to the chairman of the party’s 1922 Committee, Graham Brady. If 54 Conservative members of parliament request such a vote, Brady would then announce the threshold had been reached.

“Tory rebels expect Sir Graham Brady to make a statement this morning announcing that there will be a vote of no confidence in Boris Johnson,” Paul Brand said on Twitter.

“Only Brady knows the exact details, but this is as certain as anyone has sounded that a vote is on.”

If the confidence vote is triggered, 180 Conservative lawmakers would have to vote against Johnson for him to be removed – a level some Conservatives say might be difficult to reach. If passed, there would then be a leadership contest to decide his replacement.

One Conservative former minister said it was as yet unclear whether the threshold had been reached, adding that Brady, the only person who knows how many requests have been submitted, is “extremely tight-lipped”.

Since the release of a damning report into the so-called ‘partygate’ scandal which documented alcohol-fuelled parties at the heart of power when Britain was in coronavirus lockdowns, Johnson and his government have urged lawmakers to move on.

Steve Barclay, chancellor of the Duchy of Lancaster who was appointed the chief of staff at Downing Street after reports of the parties, urged lawmakers not to “waste the remaining half of the parliament on distractions over leadership”.

“If we continually divert our direction as a Conservative Party — and by extension the government and the country — into a protracted leadership debate, we will be sending out the opposite message,” he wrote on the Conservative website.