Republican pulls out his guns at US gun-control hearing 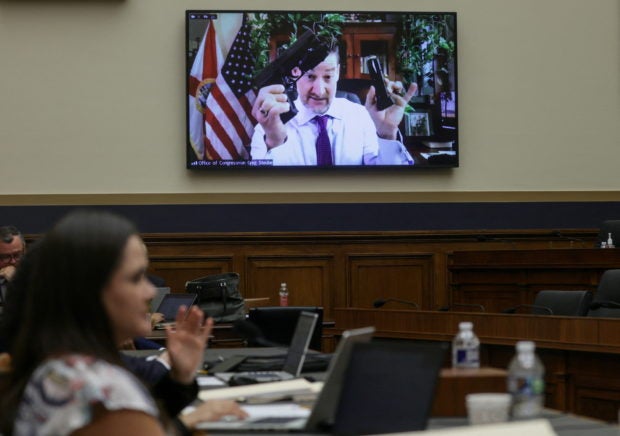 U.S. Representative Greg Steube (R-FL) holds up a handgun as he speaks via video link during the House Judiciary Committee hearing to markup the “Protecting Our Kids Act,” legislation which includes an increase on the age limit on the purchase of certain firearms, modernising the prohibition on untraceable firearms, and the safe storage of firearms, on Capitol Hill in Washington, U.S., June 2, 2022. REUTERS/Evelyn Hockstein

WASHINGTON — Republicans in the U.S. House of Representatives on Thursday objected to a Democratic attempt to advance new limits on gun purchases as one Rebpublican legislator pulled out his handguns at a hearing to complain that they could be banned.

The House Judiciary Committee met in an emergency session in the midst of a week-long Memorial Day recess as funerals were under way in Uvalde, Texas, for some of the 19 children and two teachers gunned down by an 18-year-old with an AR-15-style semiautomatic rifle last week. There were other mass shootings the week before and on Wednesday.

Republican Representative Greg Steube, who attended the committee meeting virtually from his Florida home, contended the legislation would ban various handguns. He held up four guns one by one for the committee to see.

“Here’s a gun I carry every single day to protect myself, my family, my wife, my home,” the second-term congressman said.

Judiciary Committee Chairman Jerrold Nadler interjected, “I hope to God that is not loaded.”

Steube retorted: “I’m at my house. I can do whatever I want with my guns.”

Democrats who narrowly control the House intend to put their 41-page “Protecting Our Kids Act” to a vote by the full chamber next week, House Speaker Nancy Pelosi said.

President Joe Biden’s party holds enough votes to pass the bill in the House, but it faces slim chances in the 50-50 Senate, where 60 votes are required to advance most legislation. Republicans in Congress strongly advocate for gun rights.

“It’s regretful that Democrats have rushed to a markup today in what seems like political theater,” the top Republican on the panel, Representative Jim Jordan, said. He added, “Our hearts go out to the Uvalde community.”

Meanwhile, a bipartisan group of senators is trying to craft a narrow bill. It might focus on boosting school security and possibly enacting a “red flag” law allowing authorities to seize guns bought by people suffering from mental illness. Previous such efforts have fallen flat.

Biden is expected to call on Congress to act during a national address at 7:30 p.m. EDT (2330 GMT) on gun violence.

The broader House bill couples a handful of already pending measures. It would raise the minimum age for buying certain guns to 21 from 18 and clamp down on weapons trafficking. It also would restrict large-capacity ammunition feeding devices.

Nadler, a Democrat, opened debate noting the 400 million firearms in the country and the 45,000 Americans killed by gun violence in 2020.

Anticipating Republican arguments that Democrats were moving too fast following the Uvalde killings on May 24, Nadler said, “Too soon? My friends, what the hell are you waiting for?” He recounted the long string of school shootings over the last few decades.

Republicans accused Democrats of trampling on the U.S. Constitution’s 2nd Amendment, which protects the right to keep and bear arms.

Democrats argued that right is not without limits, as they recounted tales of young children questioning whether they would live through the next day’s classes.