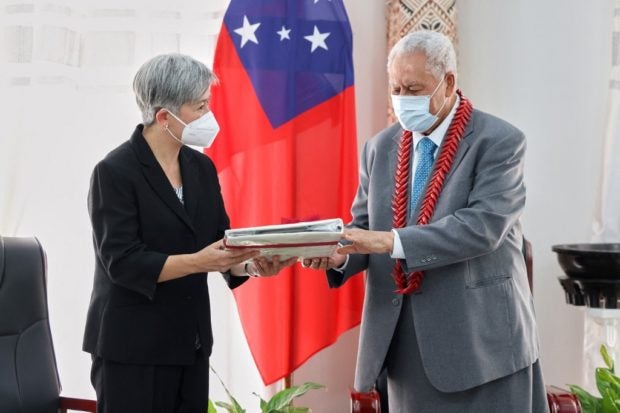 “We do understand how important these maritime assets are to island nations,” Wong said.

Mata’afa welcomed the “generous” offer of a replacement “despite the unfortunate circumstances of our last boat”, adding that she hoped lessons had been learned for “a very critical area of our maritime security.”

Wong was sworn into office 10 days ago but has already visited Fiji as her center-left government tries to fix badly strained ties with Pacific neighbors.

She is expected to visit Tonga later this week, just as China’s Foreign Minister Wang Yi wraps up a 10-day island-hopping tour of the Pacific.

Wang has pitched a radically increased role for China in regional security, much to the concern of the United States and Australia.

“We have taken a view that regional security is an issue for the Pacific family,” Wong said.

Although Wang failed to secure support for a regional security deal that would have seen Beijing play a much bigger role in sensitive areas including policing and cybersecurity, he has inked a series of country-specific agreements on his trip.

In Papua New Guinea on Friday he is expected to sign a memorandum of understanding on investment cooperation on “green development” with authorities in Port Moresby.

Mata’afa said there had been a “misrepresentation” of some deals signed by China in the region.

“The signing that took place here last week,” she said, concerned “bilateral programs, projects, most of them had started a number of years ago.”

She said Samoa would oppose a regional pact with China until the region — some of which recognize Taiwan rather than Beijing — discussed the matter collectively.

“Our position was that you cannot have regional agreement when the region hasn’t met to discuss it,” she said.

“(To) have an expectation that there would be a comprehensive decision or outcome was something that, you know, we could not agree to.”

US to announce plans to battle illegal fishing in the Pacific