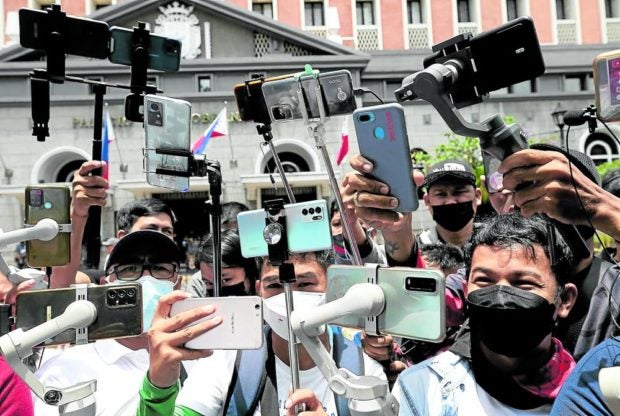 NEWS GAME CHANGER? The recent election season saw the emergence of more vloggers covering events alongside mainstream media. The group photographed here is composed mostly of pro-Marcos and pro-Duterte vloggers swarming around activist priest Robert Reyes outside the Commission on Elections main office in Manila on May 11. —RICHARD A. REYES

MANILA, Philippines —Accrediting vloggers to cover President-elect Ferdinand Marcos Jr. in Malacañang will be a priority of the Presidential Communications Operations Office (PCOO) under the watch of appointed press secretary Trixie Cruz Angeles.

“We are … pushing for the accreditation of vloggers to be invited to some of the briefings, especially those conducted by the President-elect. That is one priority we have formulated,” Angeles said at the Laging Handa briefing on Wednesday.

She did not expound on the guidelines for accrediting vloggers who would be allowed to cover presidential events.

In a statement, the National Union of Journalists of the Philippines (NUJP) said that while the accreditation of vloggers to cover Malacañang in principle entailed democratizing access to the President-elect, it “must not be at the expense of institutional media, which were sidelined during the [election] campaign as false information spread rapidly online, some of which were traced to the same network.”

In Department Order (DO) No. 15, Andanar said accreditation would be issued to any Filipino citizen at least 18 years old and with at least 5,000 followers on any social media platform.

Per his DO, a social media practitioner is “a person that maintains a publicly accessible social media page, blog, or website, which generates content and whose principal advocacy is the regular dissemination of original news and/or opinion of interest.”

In May 2017, a pro-Duterte vlogger was allowed to cover Duterte’s official visit to Russia.

Angeles said she would “make an assessment of all the pending projects, and we’ll decide later whether to prioritize them or put them possibly on the back burner.”

Asked if the PCOO would allow all journalists to physically cover Marcos Jr.’s events, she said: “We’ll have to look at the existing policies first and determine, make a decision, as to how appropriate they are for the current times.”

In February 2018, Rappler reporters, including its CEO Maria Ressa, were banned from covering the events of Duterte after he called the news site a “fake news outlet.”

In a TV interview on May 16, Victor Rodriguez, the longtime spokesperson of Marcos Jr. and his appointed executive secretary, said vloggers could also be considered members of mainstream media.

“The way we conduct our news reporting has also changed. Even the traditional brick-and-mortar media have resorted to the use of social media,” Rodriguez said.

“We will see if they also have the right to be reporting what is happening to the state of our nation,” he added.

But University of the Philippines journalism professor Lucia Tangi, president of the Journalism Studies Association of the Philippines, told the Inquirer that accrediting vloggers to cover Malacañang or the presidency would be “problematic.”

“We must continue to uphold and protect the integrity of the journalism profession,” she said.

Journalism professor Danilo Arao of the UP College of Mass Communication said accrediting vloggers to cover the Palace could be “dangerous” because fake news was often disseminated by influencers and vloggers not trained in the practice of journalism.

Angeles, who maintains a vlog seen as favorable to Duterte, said the PCOO was looking to hold Palace briefings once or twice a week, “and more if needed.”

“The regular [once-weekly briefings] are for the updates on pending issues, and then possibly a second one if there are issues that need to be addressed immediately,” she said, adding:

“We’re not going to limit it, of course. If it is necessary, we will have more briefings. But other than that, the plan is one or two at least.”

When he was running for president, Marcos Jr. favored vloggers and influencers and largely shunned the mainstream media, believing they were “biased” against him. Several journalists who covered him reported being harassed or boxed out of the coverage.

Among others, Arao suggested that Angeles consult the Malacañang Press Corps (MPC) and other stakeholders regarding her proposal.

In a statement, the MPC said it would “defer comment on the matter until the details of the proposed policy are threshed out by the incoming PCOO leadership.”

Arao said Andanar accredited bloggers and influencers but they rarely showed up for official Malacañang briefings. The policy came under fire after a known pro-Duterte blogger, Sass Rogando Sassot, confronted a foreign correspondent over the latter’s preference to interview a certain blogger critical of Duterte.

“Given the toxic media landscape, this is a dangerous proposal given that ‘fake news’ peddling is being perpetrated by certain ‘influencers’ and there is ongoing harassment and intimidation of certain journalists toward ‘de-legitimizing’ them,” Arao said.

Said the NUJP: “The space for trained professional journalists providing vetted information continues to shrink, and if the incoming Marcos administration is sincere in upholding transparency and press freedom, it would ensure that this space is protected.”

Asked then how the PCOO would implement quality control over accredited social media practitioners, Ablan said he hoped they would “behave” once given accreditation. With this presumption, he said, there was no reason to state in the DO a prohibition on the use of foul language.

According to a Freedom of Information request lodged in the electronic FOI (eFOI) portal, as of Aug. 15, 2021, there were no social media accounts or blogs accredited by the PCOO.