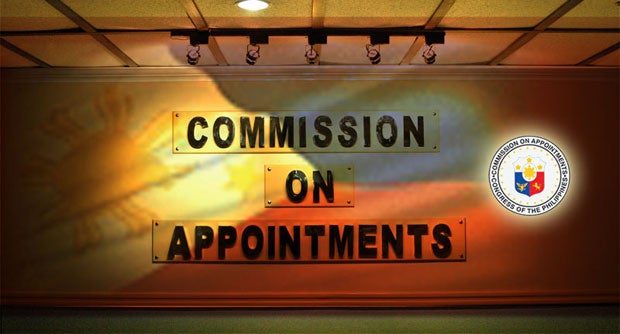 MANILA, Philippines — The Commission on Appointments (CA) has decided to give President-elect Ferdinand Marcos Jr. a free hand in appointing his own officials by bypassing the confirmation of five nominees of outgoing President Duterte to three constitutional commissions.

Only eight members of the CA’s committee on constitutional commissions and offices showed up at Wednesday’s hearing, the CA’s last session day, prompting its chair, Sen. Cynthia Villar, to declare the absence of a quorum and adjournment of the proceedings.

This spelled the end of the line, at least in the outgoing Congress, for the ad interim heads of the Commission on Elections (Comelec), Commission on Audit (COA) and Civil Service Commission (CSC), as well as two election commissioners.

Incoming press secretary Trixie Cruz Angeles on Wednesday said Marcos Jr. was “appreciative of the gesture” of the powerful CA allowing him to choose his own officials to serve at the three constitutional bodies, which are independent agencies that generally operate outside the ambit of the President’s executive powers as each enjoys fiscal autonomy.

“We have no information as to whether or not they will be reappointed. We are only appreciative of the gesture that the President-elect’s opinion or choices on the officials are taken into consideration,” Angeles said at the Laging Handa briefing.

Senate Majority Leader Juan Miguel Zubiri earlier told reporters that members of Marcos Jr.’s incoming Cabinet had lobbied for the bypassing of the nominations to give the next President a free hand in appointing the officials he would be working with.

“There’s a lot of lobbying going on—to appoint and not to appoint. I know for a fact that many future Cabinet members… have asked me to give the opportunity to the new President, which is a reasonable request. I’ve been getting many calls,” he said.

But the senator said there was no request from Marcos Jr. himself. “Nothing from the President-elect. [Marcos Jr.] is very careful also because he used to be a senator so he knows the importance of legislation. He never mentioned anything to me,” Zubiri said.

He said most of his colleagues also wished to extend that courtesy to Marcos Jr.

After Villar declared the lack of quorum, Sen. Christopher Go, a staunch ally of Mr. Duterte, said he would like to put on record that “I would have voted in favor of ad interim appointments if they pushed through.”

Sen. Aquilino Pimentel III had tried to make a last-minute appeal on behalf of Justol and Nograles, arguing it would be a waste to bypass qualified and competent nominees with no one expressing opposition.

He noted that Marcos Jr. would still have the chance anyway to appoint two of the three other commissioners in both the COA and the CSC, which would be a better outcome and allow for more “checks and balances.”

Pimentel cited in particular the case of Justol, saying it would be a waste to bypass a career official like her only because her appointment came in February when Congress was no longer in session and the campaign was in full swing.

Maybe we can proceed on a case-to-case basis,” he suggested.

But Zubiri argued that, “If we make [this] case-to-case, then we’re favoring one over the other. It would be unfair to the appointees.”

Zubiri also reminded Pimentel that the CA was a “political body.”

“We cannot please everybody. This is a political body and we know there’s also a request from the incoming administration to give them that courtesy [of making its own appointments],” he said.

In an interview after the hearing, Comelec’s Garcia said he respected and understood Zubiri’s position on this matter, “considering there is [a] precedent for it and [the lawmakers] need to weigh which direction to go, whether to respect the appointing authority or just let the new appointing authority… decide.”

Zubiri had recalled that, in 2016, then Senate President Juan Ponce Enrile invoked Section 20 of the CA rules allowing any member to call for a suspension of any nomination or appointment.

Enrile explained at that time that an appointment by the outgoing President would deprive the incoming President the free hand to choose the people he would want to represent him.

Quoting Enrile, Zubiri said, “I tell you, ambassadors deployed abroad are representatives of the President. It would be unfair to the next President if these people are appointed by the outgoing President.”