MANILA, Philippines — A Davao Oriental Court has dismissed the murder and attempted murder case filed against one of the trustees of Ibon Foundation.

Albino Reynaldo D. Oliveros has been charged with murder and two counts of attempted murder for being part of a military encounter with the communist movement in Lupon, Davao Oriental on Sept. 13, 2018.

Witnesses have identified Oliveros and a fellow Ibon Foundation executive Antonio Tujan Jr. as among those who were part of the encounter.

The court has already cleared Tujan after he presented documentary evidence that he was out of the country from January 2018 to January 2019.

In the case of Oliveros, his bid to dismiss the criminal case was denied. He then filed a motion for reconsideration and presented documents — passport bearing a stamp of departure and arrival in the country.

Based on his passport and official travel records from the Bureau of Immigration, he left the country on May 4, 2018, for Kenya, and for the month of September 2018, except September 20-23, he was in Kenya. From Sept. 20 to 23, he attended the Pan Africanism Today Conference in Ghana.

Aside from his records from the Bureau of Immigration, Oliveros also attached the request letter of the Socialist Forum of Ghana for his tourist visa to enable him to attend the Third Annual Pan Africanism Today conference.

“The Supreme Court ruled in Lejano vs. People that Philippine passports contain ‘the official record of travels of the citizen to whom it is issued’ and the entries therein are ‘presumed true’,” the court said.

“Additionally, certifications from Immigration officers of a particular State enjoy the presumption of trustworthiness, which “arises from the sense of official duty and the penalty attached to a breached duty, in the routine and disinterested origin of such statement and in the publicity of the record,” the court added.

The court said Kenya is 9,989 kilometers away from Lupon, Davao Oriental, and would take 14 hours to travel from Nairobi to Manila by airplane and another one hour and forty-five minutes air travel from Manila to Davao.

“Movant’s (Oliveros) documentary evidence undeniably shows that it was physically impossible for him to be the same person whom PVT Petere Jr., one of the complaining witnesses, has alleged to have committed the aforementioned non-bailable criminal charges,” the court said.

Besides, it added that the prosecution has failed to provide evidence to counter the travel documents presented by Oliveros.

The dismissal of charges against Oliveros and Tujan is not the first criminal case dismissed by various courts against individuals or groups that have been tagged to have links with the communist movement. 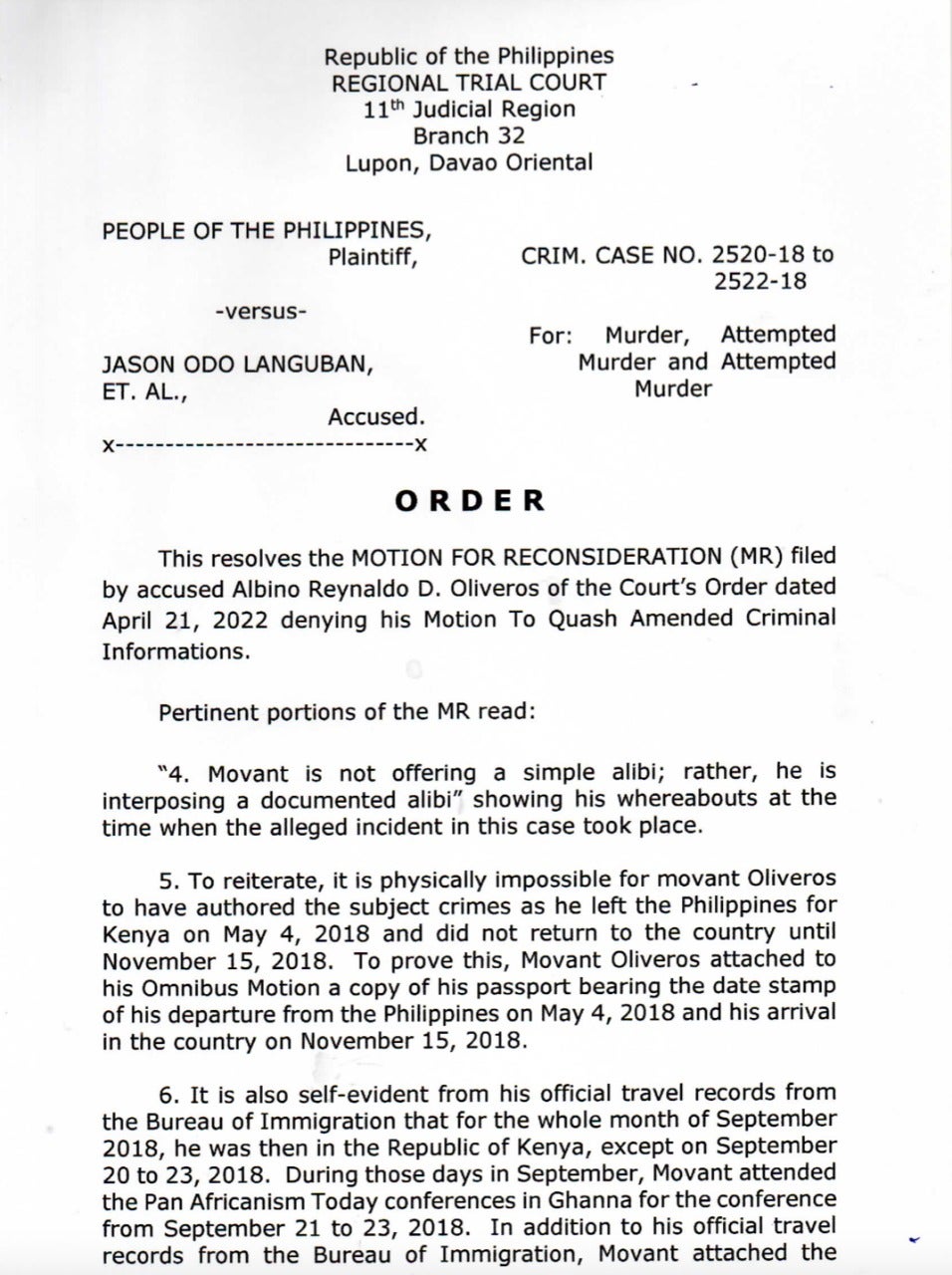 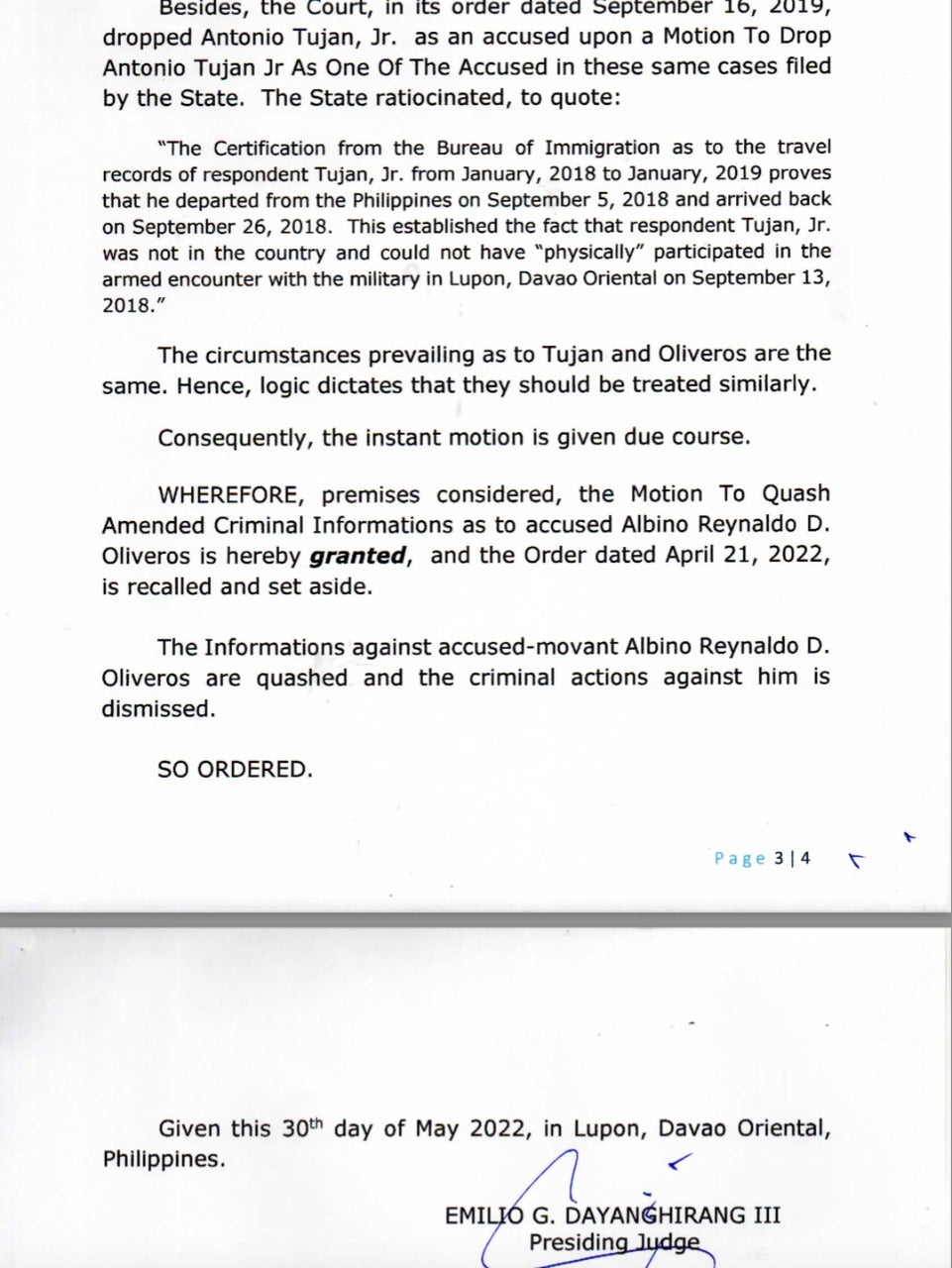 Read Next
Pagasa: Fair weather likely across PH on first day of June
EDITORS' PICK
Bongbong Marcos says PH ‘open for business’ with new Clark Airport terminal
Individuals affected by ‘Karding’ now over 157,000
Newbie gamers are in for a treat with the power-packed feature of vivo Y16
Karding damage to infrastructure at P23M
House energy committee chair Arroyo bats for cheap electricity
Reignite your passion with the vivo Y35
MOST READ
Angelica Panganiban ‘duguan, sugatang mom’ one week into breastfeeding
LPA enters PAR, may develop into tropical depression
Badoy not with Office of the President, NTF-Elcac, under Marcos admin — solon
Charges readied vs gov’t guard with P290-M deposits
Don't miss out on the latest news and information.