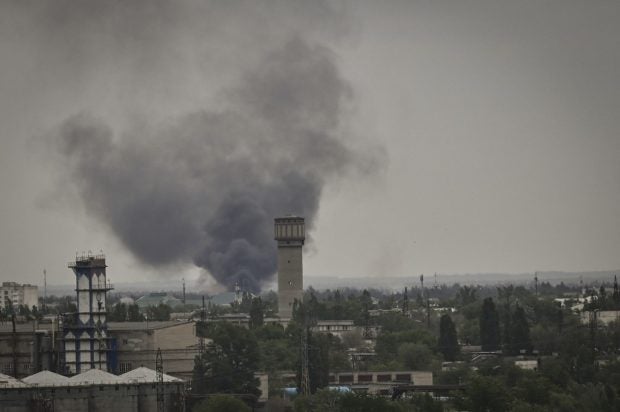 Smoke rises during shelling in the city of Severodonetsk, eastern Ukraine on May 21, 2022. (Photo by ARIS MESSINIS / AFP)

KYIV, Ukraine — Russian forces were edging closer to the center of the eastern Ukrainian city of Severodonetsk despite fierce resistance, Kyiv’s regional governor in the region said Monday.

“The Russians are advancing into the middle of Severodonetsk. The fighting continues. The situation is very difficult,” the Lugansk regional governor Sergiy Gaiday said in a statement on social media.

After failing to capture Ukraine’s capital Kyiv in the early stages of the war, Russia has shifted its focus to the eastern Donbas region and is attempting to consolidate areas under its control.

He added that three doctors in the area were reported missing after their vehicle was discovered badly damaged and that two volunteers had been targeted while driving.

Severodonetsk, with a pre-war population of around 100,000 people, is one of several important urban hubs that lie on Russia’s path to capturing the entire Lugansk region, a key objective of Moscow’s military.

Its forces earlier said they had captured Lyman, a smaller town and former railway hub in the area, and are ramping up pressure on Severodonetsk and its sister city Lysychansk.