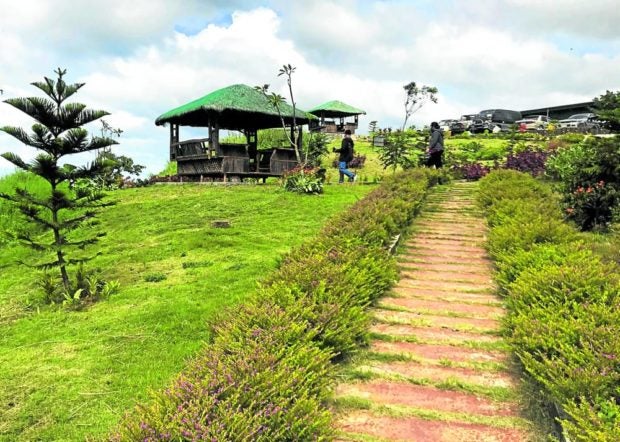 FROM DUMP TO PARK This used to be a mountain of garbage in Baguio City that toppled in 2011, killing six people and burying houses in 20,000 cubic meters of trash. The Baguio government has converted this area into an ecological park. (File photo by VINCENT CABREZA / Inquirer Northern Luzon)

BAGUIO CITY, Benguet, Philippines — As the Cordillera population grows, 22 possible sites for engineered sanitary landfills have hurdled the initial examination of the Environmental Management Bureau (EMB) and may be added to nine facilities currently serving or are being put up for the 1.797 million residents in the mountainous region.

According to Abrera, the areas that currently have active landfills are the towns of Alfonso Lista and Lamut in Ifugao, which is home to the world-famous rice terraces; Apayao’s Pudtol, Calanasan and Luna towns; Tabuk City and Rizal town in Kalinga; and Benguet’s La Trinidad Valley and a private compound of gold producer Lepanto Consolidated Mining Corp. in Mankayan town.

As of the 2020 Census, these Cordillera provinces have had their respective populations rise, which would generate corresponding increases in solid waste.

But at the start of the coronavirus pandemic in 2020, the Philippine Statistics Authority observed slight drops in population in 10 Abra municipalities, two Apayao towns, four Benguet towns, four Ifugao towns, one town in Kalinga and five towns in Mountain Province.

EMB inspectors have been strict about a 13-point checklist before approving landfill projects due to the terrain, making sure these potential waste facilities would not be within the proximity of surface and groundwater sources, or environmentally critical areas, Abrera said at a briefing on May 25.

Mayor Benjamin Magalong said they were considering a proposal to convert plastic waste into fuel pellets to reduce the city’s daily average of 190 tons of rubbish.

Businessman Robert John Sobrepeña has been negotiating with Sablan town in Benguet to put up a waste-to-energy facility there instead to serve Baguio and five adjoining Benguet towns, which are part of an economical coalition called BLISTT (Baguio and the towns of La Trinidad, Itogon, Sablan, Tuba, and Tublay).

Baguio has no area suited for a landfill and has spent P100 million annually to haul its waste to a landfill in Tarlac province.

Its only open dump in Barangay Irisan was closed and has been transformed into an ecological park.

The former dump was the subject of a 2012 writ of kalikasan won in court by the late Bishop Carlito Cenzon and residents of Irisan and neighboring Tuba town in Benguet, including national artist Ben Cabrera (also Bencab), after a massive trash slide buried homes at Asin Road in 20,000 cubic meters of garbage. The dump, which the community had previously shut down, was toppled by a storm and had killed six people including a pregnant woman.

The new park has replaced what used to be a 16-story trash mountain (equivalent to approximately 10,000 truckloads of garbage), a development that led the EMB to request the Court of Appeals to lift a temporary environmental protection order over the decommissioned Irisan facility, said Abrera.

DENR to LGUs: Set up landfills or face sanctions