DENR to LGUs: Set up landfills or face sanctions 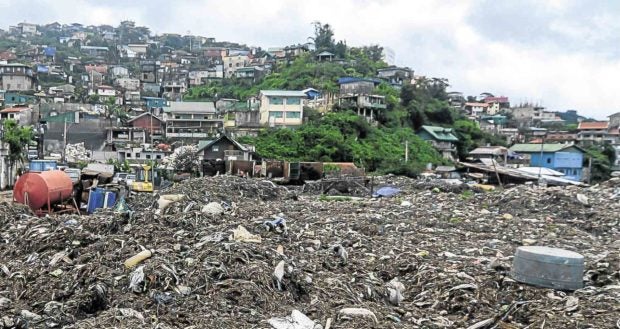 SOLVING TRASH WOE The closure of Irisan dump in Baguio City seven years ago has prompted the local government to look for solutions to its garbage problem, including a sanitary landfill and a waste-to-energy project. —KARLSTON LAPNITEN

LA TRINIDAD, Benguet, Philippines — More than 30 local government units (LGUs) in the Cordillera were asked to fast-track efforts to put up waste disposal facilities or face sanctions for failure to comply with environmental law.

Environment Undersecretary Benny Antiporda last week warned officials of these towns against ignoring the Ecological Solid Waste Management Act of the Philippines (Republic Act No. 9003) mandating local governments to shut down existing dumps and set up their sanitary landfills.

“We can suspend them (local officials), and realize this could be their worst dream,” said Antiporda, who chairs the National Solid Waste Management Commission. He did not set a deadline for local officials to comply with the law.

Records from the Environmental Management Bureau in the Cordillera showed that only 44 of 77 towns in the region have SWMPs.

The towns of Bokod, Itogon and Kabayan have been declared protected areas under Proclamation No. 268 issued by former President Joseph Estrada in accordance with RA 7586.

Itogon Mayor Victorio Palangdan said they had been asking the Department of Environment and Natural Resources (DENR) to exclude several areas identified as potential areas for sanitary landfills but their proposal had been turned down by the agency.

In 2015, the Itogon town council passed a resolution urging the DENR to facilitate the exclusion of Barangay Tinongdan, Loacan, Gumatdang, Ampucao and Dalupirip as protected areas.

“We want to comply with the law, but it is another law that is hindering us,” Palangdan said.

According to Ralph Pablo, DENR Cordillera director, excluding parts of the protected areas from the coverage of RA 7586 is possible as long as these areas do not affect bodies of water.

If there are no feasible areas, the affected towns can enter into an agreement with nearby towns that have solid waste disposal facilities, he said. —Karlston Lapniten