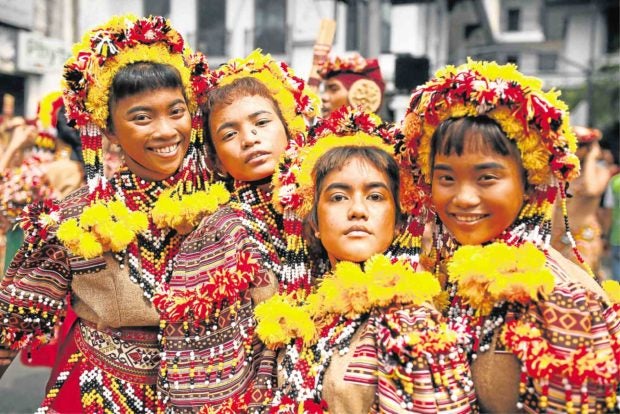 DAVAO THANKSGIVING Kadayawan is celebrated in Davao City to showcase its people and nature’s bounty. On Saturday, groups joining the Indak-Indak sa Dalanan (street dancing competition), a festival highlight, treated thousands of residents and visitors to a feast of color and sound. —KARLOS MANLUPIG

DAVAO CITY, Davao del Sur, Philippines — Inside a tree-lined compound on Maa hills here, a kiosk displays what remains of the Japanese musical instrument koto, except that aside from the usual strings, remnants of a hard disc drive, DVDs and other discarded metals one would easily recognize are meticulously screwed onto it.

“I want to retain the natural sound of things, I do not want to follow the sweet, mellifluous tone we normally hear from Western music,” said Narciso, who invented the curious piece that is both a furniture display and a musical instrument.

As he started playing, the piece produced a relaxing sound. Nearby, drum artist Neil Cervantes led the playing of African drums to showcase the healing power of rhythm.

Up in the sloping ground, other booths lined up displaying paintings. Among them are the pastel artworks of Davao artist Bong Perez whose painting, “Contrast of Life,” depicting the widening gap between the rich and the poor in the country, won a slot at the Beijing International Art Biennale this year.

His work, one of only two Filipino artworks that made it to the international art fair participated in by 125 artists, will be exhibited at China’s National Art Museum in Beijing for a month.

As the annual Kadayawan Festival kicked off, Davao artists and craftsmen gathered at this hillside retreat in Maa for the Art Hunt, the first bazaar-type art in the park exhibit, displaying various arts and crafts.

Artist Vic Secuya, who owns the compound, opened the space for free to inspire artists, craftsmen and artisans to present their creative works to the public.

“It is my way of giving back,” said Secuya, who lobbied hard for government support to spur development of the city’s creative industries.

He hopes the Art Hunt sparks a movement among Davao artists to push for the awakening and full blossoming of the local creative economy.

“It’s not just fruits and food that Davao City has to offer, we also have our artworks,” said Secuya, whose art exhibit in Brussels last year practically sold out, putting Mindanao art on the international map.

“My advocacy has always been to develop the creative economy in Davao City,” he added. “Art is a big industry.”

The United Nations Educational, Scientific and Cultural Organization has encouraged cities around the world to tap the revenue-earning capacity of their creative industries as a way of attaining sustainable development.

“The artists can always produce, we don’t need doleouts but we need an art marketing infrastructure and that would have to start by coming up with a database of all Davao artists,” Secuya said.

He pointed to the need for city government support in setting up an art marketing infrastructure that links the artists to local patrons and the international market.

Aside from Art Hunt, another group of Davao artists, Tabula Rasa, is also holding an exhibit at the Felcris Centrale until the end of the month, said its head, Dinky Munda.

Kadayawan opened on Aug. 2 with the Subang Sinugdanan, a reenactment of the convergence of the different Davao indigenous tribes. Among the festival’s highlights are a monthlong agritrade fair; the weekend farmers’ market; fashion accessories and apparel design competition; and the Indak-Indak sa Kadalanan (street dancing competition) that was held on Saturday.

In time for Kadayawan, fruits like durian, mangosteen and lanzones flooded the streets, bringing prices down, to the delight of locals and tourists.

Davao artists hope people also delight on and spend for their artworks, “because that’s the only way you encourage art,” Secuya said.