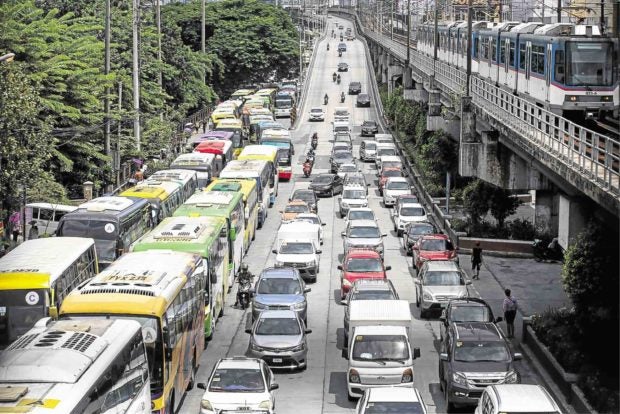 50-50 A petition circulating on the web wants the MMDA to dedicate half of the lanes on Edsa to public transport. —JAM STA ROSA

MANILA, Philippines — An online petition is pushing for half of the space on Edsa, the busiest thoroughfare in Metro Manila, to be converted into bus lanes.

The petition, which currently has over 150 signatories, was presented last week to the office of Sen. Grace Poe and Bong Nebrija, the Metropolitan Manila Development Authority (MMDA) Edsa traffic czar, for deliberation.

According to Jun Ramos, the author of the petition, the goal was to have the MMDA dedicate “50 percent” of Edsa’s lanes to passenger buses.

He lamented that buses were being blamed for the gridlock when they constituted merely two to three percent of the vehicular volume on Edsa.

“What should be limited are the private cars. They should not monopolize Edsa,” Ramos said.

While his proposal would mean longer travel periods for private vehicles, it would lead to a faster commute for those using public transportation.

“That’s actually better, because it would encourage more people to take public transport because it is more efficient,” Ramos told the Inquirer.

Since the majority of Edsa users patronized buses and other forms of public transport like himself, more lanes should be allotted to them.

“That’s how you achieve justice on Edsa,” he said.

Like most people, the 45-year-old Ramos has grown used to the harried life of a commuter. He drives his own car, but every now and then, he would take the bus to pass through the Cubao area.

Commuting has become so unnecessarily complicated and challenging, he observed.

“Not to mention that traffic doesn’t even move, because there are so many private cars on the road. There are so many long-term solutions. But the immediate action must be to prioritize commuters,” he said.

Netizens called the MMDA “anticommuter” and “antipoor” when it decided almost two weeks ago to implement to the letter the yellow lane policy.

This is not the first time frustrated commuters like Ramos have tried to come up with suggestions to improve traffic on the busy thoroughfare.

Transport groups like Komyut, AltMobility PH and Commuters of the Philippines have also recently taken concrete steps to pressure policymakers to shift to a more propeople perspective.

Once the petition gets more signatories, Ramos said he was eyeing working with transport and commuter groups to craft a position paper on their demands and suggestions to the MMDA.

“There are several solutions that are believed to help decongest traffic like decentralization and elevated walkways, but these would take time,” he said. “This is a proposal coming from the perspective of a commuter himself. And we need more of these.”

Ramos’ petition can be accessed through (https://www.change.org/p/metro-manila-development-authority-increase-lanes-for-public-utility-vehicles-to-solve-edsa-traffic).