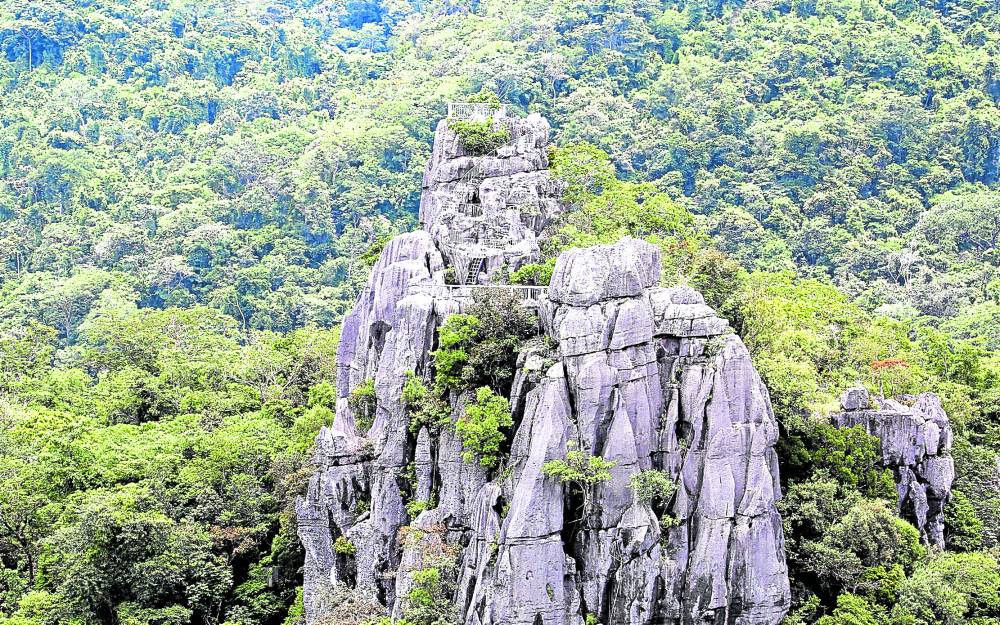 The Masungi Georeserve in Baras town, Rizal province, in 2019, has been hailed as one of the most innovative and sustainable tourism projects in the world by the United Nations World Tourism Organization. The conservation and geotourism site, however, is threatened by encroachment, quarrying activities and development projects. —NIÑO JESUS ORBETA

The call comes in the wake of an order by the Department of Environment and Natural Resources (DENR) to suspend the Mineral Production Sharing Agreements (MPSAs) granted to three quarrying companies — Rapid City Realty and Development Corp., Quimson Limestone, Inc., and Quarry Rock Group, Inc. — in the Masungi Georeserve in Baras town, Rizal province.

However, the MGF,  in a recent statement stressed that the mere suspension of agreements does not guarantee it will not operate again in the future, explaining that it usually goes back to operation after noise and public clamor dies down.

“We echo the continued call of experts, communities, and leaders to once and for all cancel the quarrying agreements in Masungi and the watershed, which will show a full and long-term commitment to their conservation,” the MGF said in a statement on Friday.

“Non-operation or even a suspension is not a guarantee that quarry operations will not commence in the future. It still gives them a runway to eventually operate, despite the many prohibitions to the same,” it added.

It also argued that the agreements were issued within protected areas where “quarrying is clearly prohibited by law.”

Even regulators have also stated that the said quarry companies have committed “gross violations constituting breach in their contracts,” said the foundation.

The foundation added that it believes the said quarrying companies “miserably failed” to justify the breaches in their contracts.

“The logical and necessary next step is to cancel the MPSAs,” said the foundation.

It also warned that two of the companies, Rapid City and Quarry Rock, have claimed that “they will not give up in their advocacy to revive the economy,” which is a sign of it returning if the government does not uphold the law against the said companies.

“We humbly and continuously call on the Palace and the DENR to intervene, cancel the MPSAs once and for all, and place the safety and welfare of an overwhelming majority over the business interests of a few,” the foundation added.